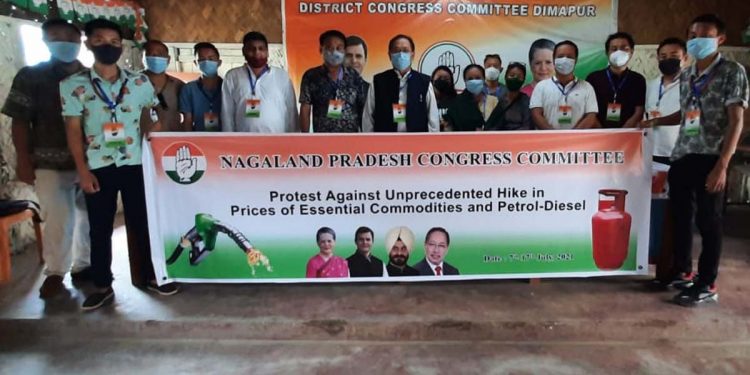 The Nagaland Pradesh Congress Committee (NPCC) joined the rest of the country in launching agitational programme against unprecedented rise in prices of essential commodities and petro-diesel.

“The agitation from July 7-17 July will witness a series of protests against the blatant apathy of the Narendra Modi government towards the plight of the people,” the NPCC said in a statement.

“In the last two months alone, the govt has hiked fuel prices on over 30 occasions and in more than 200 cities, prices of petrol have crossed Rs 100/- per litre,” the NPCC said.

The Modi government charges Rs 32.90 per litre excise on petrol and Rs 31.80 per litre on diesel, it said.

The government has earned over Rs 22 lakh crore in the last seven years by imposing high excise duty on petrol and diesel, it added.

Similarly, prices of edible oils have nearly doubled in last six months and prices of pulses have seen an unprecedented rise, the Nagaland Congress asserted.

Every household item has seen a quantum jump in prices.

Moved by the plight of people already suffering on account of the pandemic, rampant unemployment and job losses, the Congress party has launched a nationwide campaign demanding rollback in prices of petrol and diesel and check spiraling price increase of essential commodities that is going out of reach of the common man.

In Dimapur, Day 1 of agitation programme in the form of banner & sticker campaign was launched by PCC president K Therie at Dimapur DCC office.

“A series of agitation in various forms has been planned for the next 10 days and we request the public to kindly extend their cooperation especially during signature campaign,” the NPCC said.