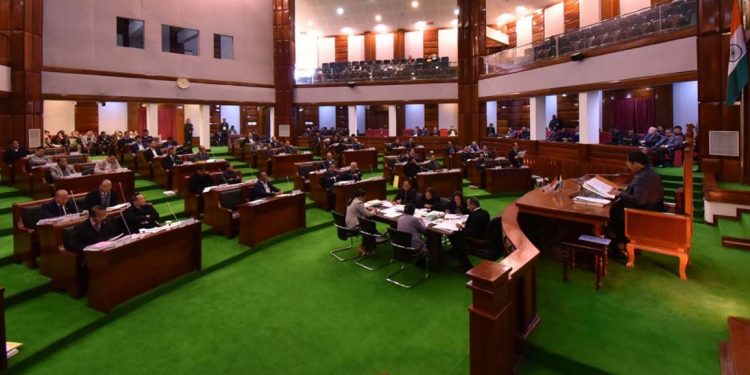 Nagaland Chief Minister Neiphiu Rio speaking at the general discussion on the budget for 2020-2021 in the state Assembly at Kohima. Image credit - DIPR

Nagaland Chief Minister Neiphiu Rio on Saturday lauded the Opposition bench for its constructive suggestion during the state Assembly session.

The ruling and Opposition have equal responsibility in ensuring good governance to the people, said Rio in his concluding remark on the general discussion of the budget for 2020-2021 in the state Assembly at Kohima.

“We need to explore all possible means to generate more resources for funding developmental activities and continue efforts to streamline the revenue collection of the government in all the sectors to enhance efficiency,” said Nagaland CM Rio said.

He also thanked the Joint Legislators’ Forum, comprising all the 60 members and the two members of the Parliament, for setting aside differences and coming together under one banner to facilitate the Naga peace process.

Rio said the state government passed the Nagaland Special Economic Zone Bill 2009 to promote economic growth and development, considering the difficulties the entrepreneurs faced in getting access to institutional credit for economic growth.

He said the main objective to create economic zones is to attract investment as well as facilitate the entrepreneurs to have access to institutional credit at affordable rates of interest.

Rio said all possible efforts will be made to facilitate mortgage of land and fixed assets in these zones against which loans can be accessed.

He added that tourism sector has shown the potential to contribute towards economic growth and attract investment to generate money for employment generation.

Rio informed the House that the huge increase in deficit is on account of the reduction in the state share of central taxes in the Union Budget.

He added that in the revised estimate of the Union Budget presented on February 1, 2020, the share of Central taxes due to be paid to Nagaland has been reduced to Rs 3,267 crore.

He assured the House that there is no way the government can avoid deficit shooting up when the amount due to be paid to the state is reduced by such a huge amount.

To promote the youth in securing good employment opportunities, the government has provided Rs 1 crore to fund the cost of coaching classes for civil services in New Delhi with Rao’s Study Circle for 25 students and another 100 students with ALS Coaching Centre, he said.

Rio was confident that the high level of exposure will help them stand a much better chance of clearing the UPSC examinations.

“We need to appreciate and understand that we cannot expect other people to pay taxes for us for all times to come. Let us not forget that among all the states in the country, our people probably pay the least amount of taxes,” he said.

“We need to change the mindset or we would not be fit to have a state,” he cautioned.

He said the government has to bear its official responsibilities and duties, important among which includes levy and collection of taxes.

Rio informed that all civilised societies run on the revenues generated by taxes – both on goods and the people.

Rio acknowledged the argument raised by the Opposition bench that the budget has not covered most of the departments.

However, he said, the financial details are reflected in the budget documents in sufficient details which chose to focus more on innovative initiatives and programmes.