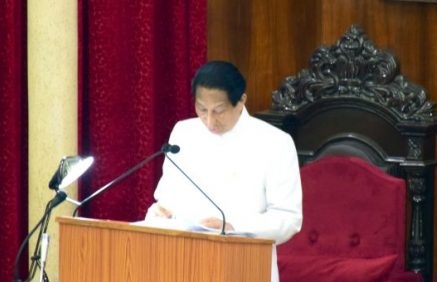 The veteran politician from Nagaland, along with 15 other personalities, was conferred the third-highest civilian award on the eve of the 71st Republic Day.

In a congratulatory message to Jamir, Rio said it is a well-deserved honour which illustrates his significant contributions and sacrifices in the service of India’s nationhood in the past decades.

Rio said he considered himself fortunate to have worked and served the country under Jamir’s able leadership.

“During the years when we worked together, I have gained much experience and knowledge as you were an exemplary leader and I was fortunate to have you as a mentor from the early years when I first became an elected legislator,” Rio said.

Nagaland CM Rio said he will always recollect the years he worked with Jamir with fond memories.

Extending his deepest appreciation to Jamir for his guidance and leadership, Rio hoped that he will continue to play the role of an elderly statesman to the Naga people for many more years to come.

NDPP president Chingwang Konyak said the government of India has recognised Jamir’s lifetime of dedication for the welfare of the public by awarding him the prestigious Padma Bhushan.

He said Jamir’s concern for the people and his political foresight is legendary.

State BJP president and minister Temjen Imna Along said it was a proud moment for Nagaland that Jamir has been conferred with the Padma Bhushan in recognition of his distinguished services of high order in the service of the nation.