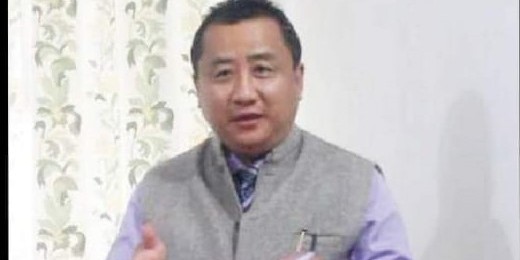 Nagaland Chief Secretary Temjen Toy passed away in his Kohima residence after losing battle with cancer on Thursday afternoon.

Toy was suffering from liver cancer and was undergoing treatment in a Delhi hospital for quite some time.

He was 57 and leaves behind his wife, two sons and two daughters.

A 1989 batch IAS officer, Toy took over as Nagaland Chief Secretary in March 2018.

Hailing from an illustrious family, his personality and character were exemplary. He was never known to have raised his voice or exhibited his displeasure even in dire situations.

“Extremely sad and shocked to know that Shri @temjentoy is no more with us. We lost an able administrator and one of the finest human being! May his soul rest in peace. May God give strength to the family to bear with this devastating tragedy,” Raj Bhavan Kohima tweeted.

“I am extremely saddened at the passing away of @temjentoy, Chief Secretary of Nagaland,” Rio tweeted.

He described Toy as a humble, upright and dedicated government servant. His death is a huge loss for the State government and for the Nagas as a whole.

Conveying condolences to the bereaved family, Rio prayed that his soul rests in peace.

President of the party Chingwang Konyak said Toy was the epitome of what a leader ought to be – compassionate, tolerant and assuring towards all.

He was loved, appreciated, admired and looked up to by all who had the opportunity to have worked with him. He was the personification of a bureaucrat with a human face, Chingwang said in a condolence message.

In his passing away, Nagaland has lost a gem of a person, an administrator and an officer the like of whom we may never have again in several lifetimes, the party said.