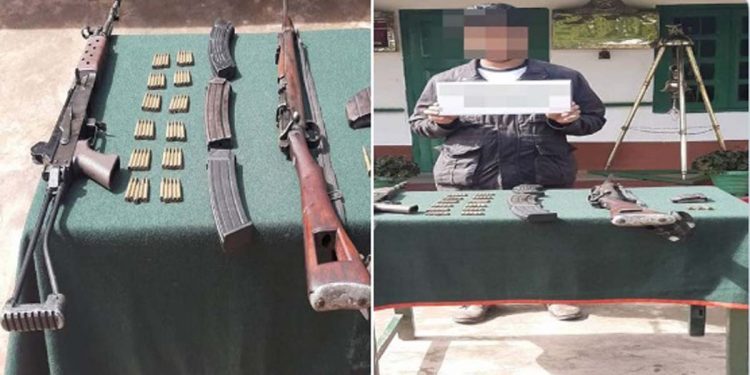 During an operation, the Zunheboto Battalion of Assam Rifles recently recovered two rifles and ammunition from the possession of an arms dealer from a place near Kholeboto in Nagaland’s Zunheboto district.

Assam Rifles on its Twitter handle on Monday said the troops were able to recover one AK 47 rifle along with three magazines, 60 live rounds and one MK 3 rifle with one magazine and three live rounds from the possession of the arms dealer.

“Zunheboto Battalion of #AssamRifles recovered one AK 47 Rifle with three magazines & 60 live rounds and one MK 3 Rifle with one magazine & three live rounds from an arms dealer near Kholeboto in Zunheboto District on 22 Aug 2020,” Assam Rifles tweeted.

According to a press release issued by the HQ of Inspector General (North), Assam Rifles, the arms dealer has been identified as 44-year-old Aghoto Yeptho, a resident of Kholeboto in Zunheboto district.

The apprehended individual along with the recovered items have been handed over to Zunheboto police station for further investigation, the press release said.

The operation was launched as part of the ongoing crackdown by Assam Rifles to prevent illegal activities.

Meanwhile, the Serchhip Battalion of Assam Rifles in a joint operation with custom officials, recovered foreign cigarettes worth Rs 1.39 crore in Old Hruikawn near Tyao river.

The recovered items were handed over to Land Custom Station, Zokhawthar.