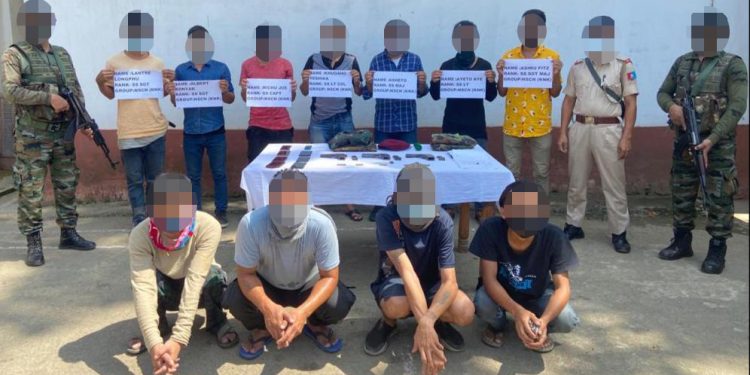 Security forces in a joint operation with police apprehended seven cadres and four overground workers of Nikki Sumi group of the NSCN (K) and an NSCN (IM) cadre from different locations here.

A defense release on Thursday said the cadres and overground workers of the Nikki Sumi group were apprehended in Thilixu village on June 23 while the NSCN (IM) cares were apprehended at Burma Camp area on June 22.

Based on a specific input, security forces, along with police, launched a joint operation and apprehended the seven cadres and four overground workers of the Nikki Sumi group who were allegedly running an illegal mess and carrying out extortion activities on the Natioal Highway module.

Three .32 pistols with magazines, 25 .32 live ammunition and some incriminating documents were recovered from them.

They were handed over to the Diphupar police station along with the recovered items.

The release said the NSCN (IM) cadre who was apprehended at Burma Camp was involved in supplying arms and ammunition. One .22 pistol and three .22 live ammunition were recovered from him. He was handed over to East police station.