Naga talks run into rough weather; peace accord should be signed at the earliest: Ex-PM Deve Gowda

Former Prime Minister HD Deve Gowda has expressed serious concern over news reports that the Centre’s talks with NSCN (IM) to resolve the Naga issue has “run into rough weather”.

The Rajya Sabha MP in a statement on Monday said: “Newspaper reports indicate that the Union government’s negotiation with NSCN (IM) to resolve the Naga problem has run into rough weather.”

Deve Gowda during his tenure as the 11th Prime Minister met the NSCN (IM) leaders in Zurich and paved the way for the signing of a ceasefire agreement with Centre in 1997.

The former PM said: “From recent statements made by those involved in the negotiations it is apparent that distrust has crept in.”

Citing his meeting with the NSCN(IM) leader, Deve Gowda claimed:

“The Naga ceasefire agreement in 1997, which followed my meeting with Mr Isak Chishi Swu and Mr. Thuingaleng Muivah in Zurich, in February 1997, was a result of constructive diplomacy.” 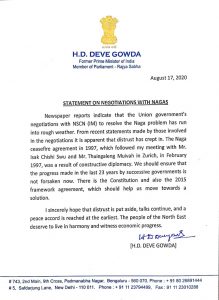 “We should ensure that the progress made in the last 23 years by successive governments is not forsaken now,” said the parliamentarian.

The former PM said, “There is the Constitution and also the 2015 framework agreement, which should help its move towards a solution.”

Deve Gowda, who wants signing of a peace accord, said: “I sincerely hope that distrust is put aside, talks continue, and a peace accord is reached at the earliest.”

The people of the Northeast deserve to live in harmony and witness economic progress, the Rajya Sabha MP added.