Lockdown: Prohibitory order to be relaxed for 5 hours in Dimapur from Monday

Dimapur district magistrate and commissioner of police Rothihu Tetseo relaxed the prohibitory order under Section 144 of CrPC in the district for 5 hours with effect from Monday.

The restriction to be relaxed from 9 am to 2 pm for the public to buy essential items within their respective colonies/villages, Tetseo said in an order.

The order, however, said the movement of the general public would be restricted in Dimapur main town area and the highway stretch within the district.

Violation of the order would tantamount to punitive punishment under Section 188 of the IPC, the district magistrate said in the order.

In another order, Dimapur deputy commissioner Anoop Khinchi directed opening of only those shops and business establishments such as pharmacies, petrol pumps, media house, essential commodities and vegetable shops from 9 am to 2 pm on Monday.

However, Khinchi, in an order, said the wholesale markets would remain open from 3 am to 8 am.

The order said the vegetable vendors would be allowed to sell vegetables in the colonies/villages only and not in the main market.

He said New Market would remain closed completely and asked the people to buy essential items from their respective colony/village shops.

Khinchi reminded that movement of all public is restricted except those coming out to avail essential services.

The consignment of 5 tons arrived at Dimapur Airport on Saturday and will be transported to Kohima for further distribution to other districts, an official release said.

The Nagaland government thanked the IAF for the help rendered to the state in the fight against COVID19. 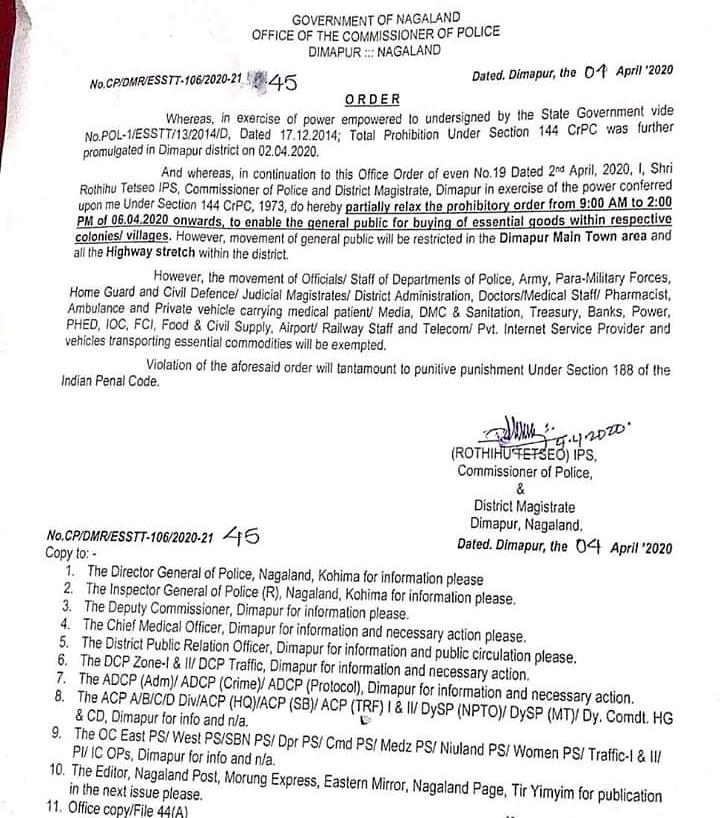