As part of the forthcoming Hornbill Festival, the Hornbill Badminton Championship 2019 – Northeast Open and Nagaland Amateurs will be held in the Indoor Stadium, Officers Hill at Kohima.

The 4-day Hornbill Badminton Championship with the theme ‘Artistry in Motion’ will be held from December 4-7.

The total prize money is Rs 3.05 lakh and there will also be exciting prizes for the semifinalists.

The championship, to be participated by both men and women shuttlers, will be held in 9 categories. 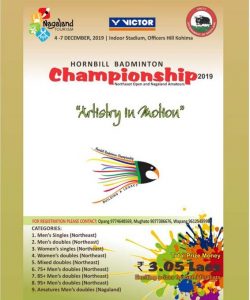 The organizers have also kept four categories for senior players from the Northeast who remain fit for the game even after crossing the age bracket of 75.

There will be another category in the championship for the amateur badminton players.

However, the Amateur doubles category is only for players from Nagaland.

It may be mentioned that the Hornbill Festival, which is also known as ‘Festival of Festival’ will be held at Naga Heritage Village, Kisama from December 1-10.

The main aim of this festival is to showcase the rich culture of Nagaland.