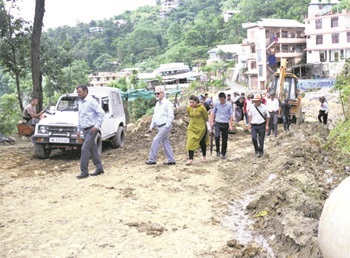 The inter-ministerial central team led by director in-charge of Agriculture and Cooperation Department, Dr K Manoharan from Kolkata and Anirban Acharyya from Union Ministry of Road Transport and Highway, visited landslide-affected areas under Kohima and Phek districts of Nagaland on Thursday.

The main purpose of their visit was to take stock of the damage caused by unprecedented rains over the last few weeks, an official press release had stated.

The team visited major landslide-affected areas like Varii and Phesama where around 32 households were reportedly affected and displaced due to landslides.

Thereafter, the team proceeded to Viswema, Kidima and Zuketsa and inspected all the major landslide-affected areas.

Thereafter, the team proceeded to the bridge over Sidzu river and inspected the area where an artificial dam was formed in the river due to a blockage caused by massive landslide that occurred below RD block, Kikruma.

Meanwhile, the team also visited and assessed damaged areas and affected houses in Kohima town due to landslide.

The officials apprised the visiting team about the extent of damage to properties, roads, paddy fields, fishery ponds, etc.