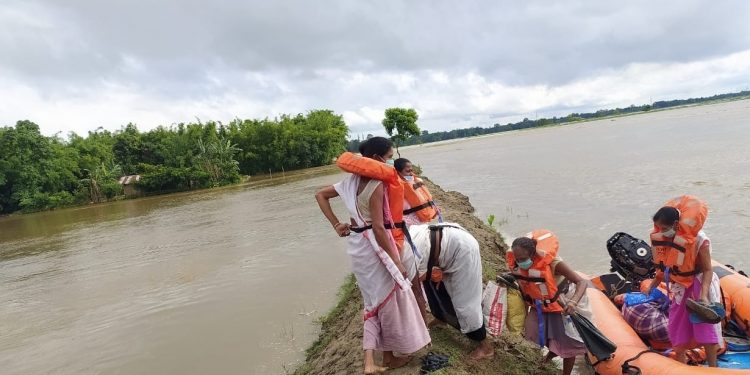 Heavy downpour in the upper reaches of Arunachal hills for the last three days is causing rise of water level in the rivers and streams in Assam’s Dhemaji district.

The evening flood report prepared by the District Disaster Management Agency (DDMA) says that around 1,600 populations of 15 villages under the revenue circle have been affected in the second wave of flash flood.

The administration has started distribution of food items and other essential items among the affected people.

On the other hand overflowing water Lali river in Jonai revenue circle has entered human habitations of Bahir-Jonai area through a breached portion of Berachapori dyke aon the right bank.

Water level of Jiyadhal, which was reportedly receding last evening suddenly rose this morning and marooned 4 families of Hesuli village.

Later a team of National Disaster Response Force (NDRF) stationed at Dhemaji was swung into action at the affected sites, who rescued 28 stranded people along with their belongings and livestock.