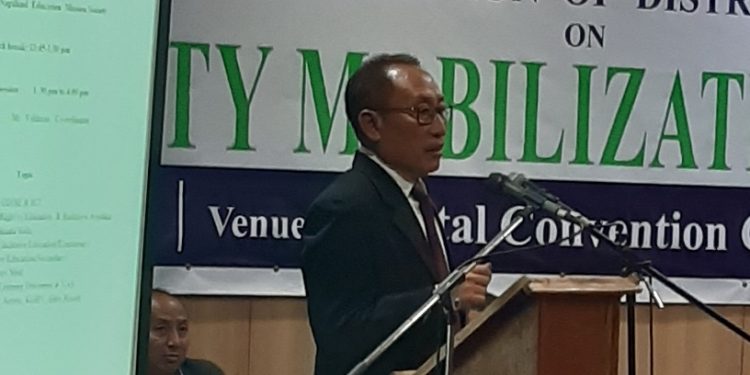 Principal secretary, school education and SCERT, Menukhol John, speaking at the programme in Kohima on May 15, 2019. Image: Northeast Now

A mobile app will be introduced in all the schools in Nagaland next month to bring ‘visible transparency’ in school education activities in every district of the State.

Disclosing this at a state-level sensitisation programme of district personnel on community mobilization and training, organized by Nagaland’s school education department, at Capital Convention Centre in Kohima on Wednesday, principal secretary, school education and SCERT, Menukhol John, said various activities will be uploaded by the schools through the app in all the districts of the State.

He said the mobile app will help in the visibility of implementing various activities at the elementary, secondary and higher secondary level.

John urged all the participants to make full use of the mobile applications in order to bring visible transparency in school education activities in every district.

John said the Centre has started grading each and every state in terms of performance grading index. “Things are going to be different with the revamping of Samagra Shiksha and the general activities of the school education department,” he said.

John assured shortage and timely distribution of textbooks, uniforms, performance indicators of teachers and students will be addressed in the coming days. He said the department will focus on the dropout students and children with special needs.

Stressing on the importance of overall performance of the department, he urged all teachers to walk extra mile to improve performance indicators all year round.

“Our state has shown improvement in terms of gender equation and decrease in dropout rates in schools but one very discouraging indicator was in the area of physical education curriculum which is the lowest in the entire country with 13 per cent, which is very discouraging,” John said.

He urged the teachers to concentrate on the area and see that physical education for children is part of the daily routine in all the schools.