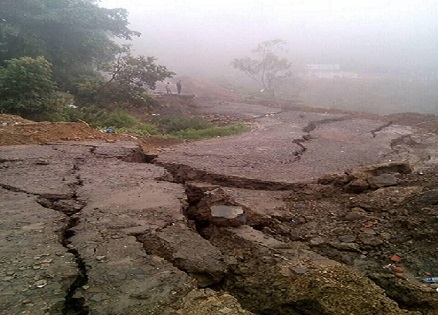 The portion of the road that sank near Kohima on June 8. Photo: Northeast Now

Restoration works on the stretch of the National Highway 29 (Dimapur-Kohima road) near Kohima which caved in following incessant rain on June 8 are in progress. Submerging of the road totally cut off vehicular traffic along the highway, the lifeline of Nagaland as well as Manipur.

Traffic remained closed on the stretch of road for the sixth day on Friday.

Landslide caused by incessant rains precipitated the sinking of the portion of the highway. Vehicles travelling to and from Kohima are being diverted to the alternative routes.

The District Disaster Management Authority (DDMA) of Kohima in collaboration with the public works department (national highways) has undertaken the restoration work.

Commissioner and secretary, PWD (Works & Housing) Bendangkoka said the section of the NH-29 that sank could open in a week’s time for both light and heavy vehicles if the ongoing work is not disturbed by weather.

On Thursday, secretary for Nagaland State Disaster Management Authority (NSDMA) Rovilatuo Mor along with other officials visited the site to inspect the ongoing work.

Bendangkoka said with the cooperation of the landowner and contractor, the road has been opened. However, he said at present vehicles including light vehicles cannot be allowed to ply due to mushy and soft soil.

Till the road is open for traffic, he said vehicles including heavy vehicles and oil tankers would continue to ply along the alternate road via Peducha and Chiesema. He also said the retaining wall would be constructed along the whole stretch of NH-29 where landslide occurred.