A release issued by the public relations officer of Nagaland Police headquarters in Kohima appealed and advised people to maintain utmost caution while circulating info on social media. 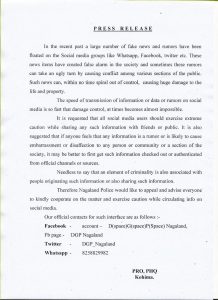 Meanwhile, whatsApp is expected to soon roll out a new feature that will make it easier for its users to distinguish forwarded messages.

In an effort to curb fake news, whatsapp will have a feature that labels forwarded messages shared on the app as ‘Forwarded’.

With the roll-out of this new feature, whatsApp users will be able to identify forwarded messages.

For this, whenever a user forwards a message on the chat app, the message will be labelled on the top right corner as ‘Forwarded’.

Notably, whatsApp has announced multiple features for its users since the beginning of this year.

Earlier, the company had revealed its plans for WhatsApp Payments, group video calls, more rights for group administrators and more.