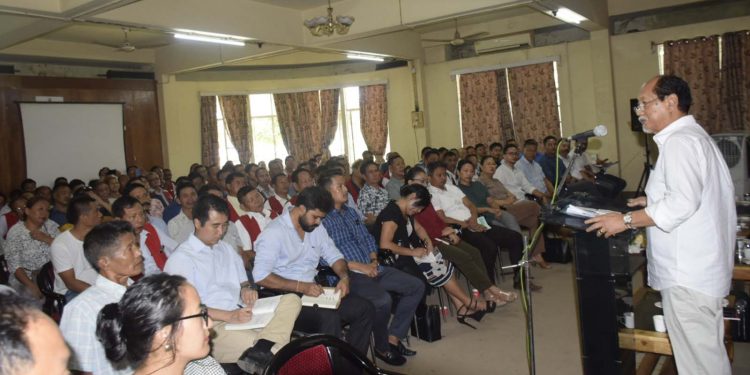 The Nagaland government on Wednesday held a meeting with the chairmen and gaon burhas (village chiefs) of the wards/villages of Sadar and neighbouring villages at Dimapur.

The meeting was held at the Dimapur Deputy Commissioner’s conference hall where issues relating to National Register of Citizens (NRC) in Assam and implementation of inner-line permit (ILP) in Dimapur district were discussed.

He asked the grassroots level leaders for proper identification of illegal immigrants in their respective wards.

Reminding that the GBs are representatives of the government, the CM appealed to them to work efficiently and sincerely for better future of the State.

Rio also directed the district administrations and police machinery to remain vigilant in ensuring strict ILP checking in order to prevent possible influx of illegal immigrants in the wake of publication of final NRC in Assam.

On the Citizenship Amendment Bill, Rio said the bill was passed in the Lok Sabha on January 8.

“But it would not affect Naga society even if it is passed in the Parliament as the Nagas are protected under Article 371(A), which came through the 16th Point Agreement. He encouraged the Nagas to speak in one voice with unity,” said Rio.

Rio termed Dimapur as a ‘mini India’ and said the commercial hub of the State has presence of both genuine as well as people of doubtful origin.

“To make Dimapur a better place, the government alone cannot help and therefore it has to be a peoples’ movement,” he said.

On the Register of Indigenous Inhabitants of Nagaland (RIIN), Rio said the exercise might take some more time as there are still many issues to be looked into.

He, however, said in Dimapur, the ILP must be accorded priority to avoid complications.

Pointing out that Dimapur has become a city of criminals, he observed that many people with doubtful origin are eyeing to settle down in Dimapur.

He asked the grassroots leaders to extend their continued cooperation in this regard.

Deputy Chief Minister Y. Patton, in his address, said issues relating to RIIN, ILP and NRC need to be taken up on priority.

Saying that more than 19 lakh people in Assam have not been able to get their names included in the NRC, Patton said the neighbouring States are facing a “delicate situation” because of this.

He said after publication of final NRC in Assam, states like Mizoram and Meghalaya have started sealing their borders, as there is a possibility of these people to try to sneak into other States.

Pointing out that Dimapur Sadar and neighbouring areas share a porous border with Assam, Patton, who also holds the Home portfolio, appealed to the Dimapur district administration and police to put in more efforts to check and stop people of doubtful origin from entering Nagaland.

For ensuring strict ILP checking and preventing possible influx of illegal immigrants, Patton said it is imperative that the public, particularly leaders at the grassroots, remain vigilant.

“We all have to play our part to ensure that there is no influx of illegal immigrants to our State,” he added.

He stressed that the chairmen of all wards and village council as well as the GBs need to be more vigilant as they know the genuine residents under their jurisdiction better.

“In case, any abnormal increase of outsiders is noticed,  the same should be immediately brought to the officials concerned of the district administration and police for necessary corrective action,” Patton .

PHED Minister Jacob Zhimomi advised the GBs and chairmen to work collectively in resolving the issue of illegal immigrants.

He said they are the law makers as per the Naga tradition and asked them to leave all blame games and work sincerely for their respective wards/villages.