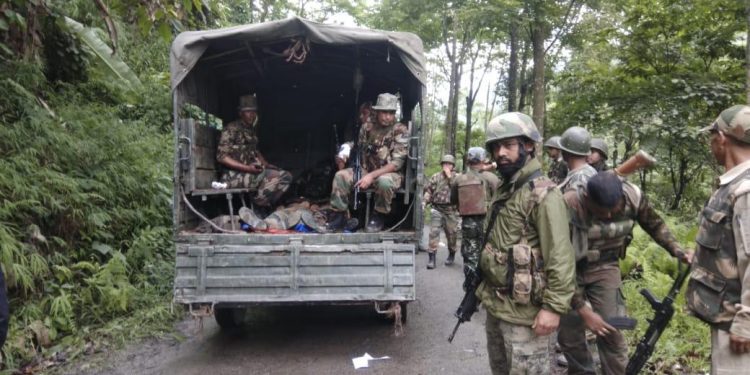 Assam Rifles personnel at the spot.

The militant attack on Assam Rifles, in which two jawnas of the security force were killed and four other jawans injured in Mon district, has been condemned by Nagaland chief minister Neiphiu Rio and home minister Y. Patton.

According to information, two Assam Rifles personnel were killed on the spot while four others were seriously injured in an ambush at Changlangshu village, around 20km from Toub town, in Mon district of Nagaland on Saturday.

The injured were airlifted to Air Force hospital in Jorhat district of Assam.

Defence sources said a convoy of three vehicles of 40 Assam Rifles, based in Tuensang, was moving from Tobu to Ukha village in Mon district when they were fired upon indiscriminately at Changlangshu village, leading to the death of two soldiers, including a junior commissioned officer, and injury to four others at around 1.30 pm.

They suspected Yung Aung-led faction of NSCN (Khaplang) to be behind the attack. However, no group claimed responsibility till the time of filing of this report.

Mon deputy commissioner Thavaseelan K. confirmed the death of two soldiers and injury to four others.

The incident took place three days after Arunachal Pradesh MLA Tirong Aboh, his son and nine others were killed in Tirap district in an ambush by suspected militants on Monday.

While condemning the attack, Nagaland chief minister Neiphiu Rio on his Twitter handle stated: “Reports of violence and attacks on security forces by unknown persons, in Mon district, is highly condemnable. I convey my condolences to those who have been killed and wish speedy recovery for the injured. I further appeal for peace from all sections.”

Reports of violence and attacks on security forces by unknown persons, in Mon district, is highly condemnable. I convey condolences to those who have been killed and wish speedy recovery for the injured. I further appeal for peace from all sections.

Patton said some armed persons were involved in exploding improvised explosive devices that led to the killing of one Naik Subedar and a jawan besides injury to four other soldiers.

He directed the Nagaland Police to thoroughly investigate and get the details of the incident to bring justice.