Naga students’ bodies to take out rally in Delhi on Wednesday 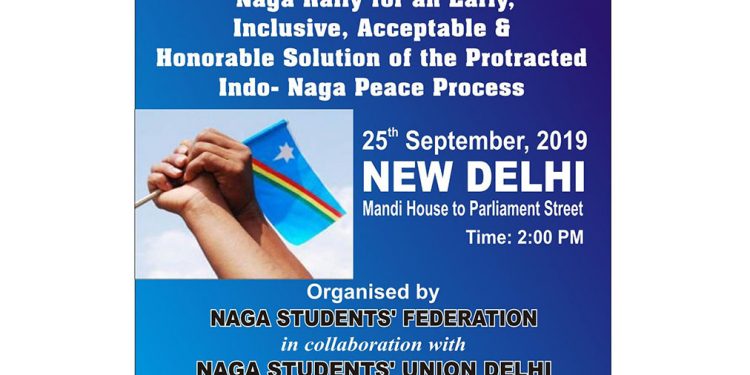 The rally will be taken out at 2 pm on Wednesday under the theme ‘Implement the Principles of Framework Agreement’.

The agitating bodies are taking out the rally to highlight that India and Nagalim as two separate political entities.

The rally will be taken out from Mandi House to Parliament Street.

The decision was taken against the backdrop of Prime Minister’s advice to R N Ravi to find solution in three months time, within the constitution of India.

This they feel directly negates the principle of the Framework Agreement signed between the government of India and the NSCN-IM.

The Framework Agreement was signed with the understanding to find model of solution based on the principles of shared sovereignty between India and Nagalim.

It also sought peaceful co-existence of the two entities, and unique history and situation of the Nagas.

Therefore, the NSF as the custodian of the Nagas’ future is compelled to question the sincerity and political vision of the Government of India in resolving the protracted Indo-Naga conflict which has cost immense suffering and lives to both the parties.

The rally will also joined by many illustrious personalities among the Nagas.