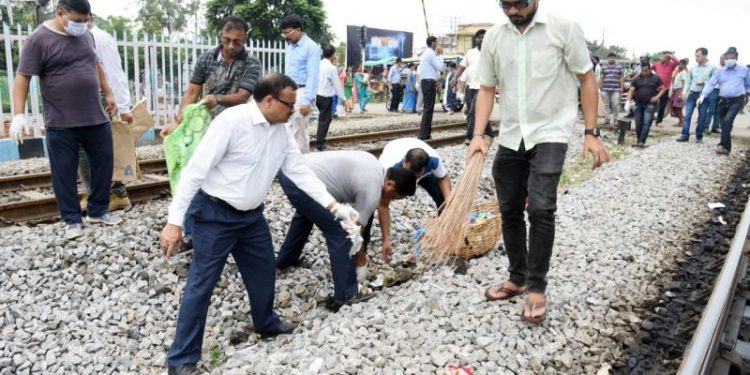 The Northeast Frontier Railway (NFR) was on Tuesday engaged in a massive ‘Shramdan’.

It was part of the ‘Swachhta Pakhwara’ which is being observed throughout N F Railway.

It was offered by all officers and staff of NF Railway.

The ‘Shramdan’ was offered simultaneously in all the five divisions of NFR apart from the headquarter area in Maligaon.

Divisional Railway managers led the ‘Shramdan’ in their respective divisions.

In Maligaon area, general manager, NF Railway, Sanjive Roy himself led the ‘Shramdan’ in presence of other senior officials and employees.

He went to several residential quarters and interacted with residents about resisting use of plastic in railway premises.

He also interacted with public in railway premises and made them aware of ill effects of using plastics indiscriminately.

The general manager advised everyone to use only those plastic items which can be re-cycled.

During the drive, bags made from clothes were also distributed among persons for day to day use and to avoid plastic made bags.

Roy also took part and led others in collection of plastic waste from railway colonies, roads and railway tracks.

As part of the ‘Swachhta Pakhwara’ which will continue till September 30, various activities will be undertaken spreading over almost all railway station and premises.

Vigorous inspection to check cleanliness aspects and quality checking drive will be undertaken during this period all over N F Railway.

Apart from providing separate dustbins for bio and non-bio degradable items in railway stations for use of railway passengers, almost all trains have already been fitted with bio-toilets which is eco-friendly.

All authorized vendors doing business in N F Railway premises have already been instructed to use only re-cycle able plastic for packaging of food.