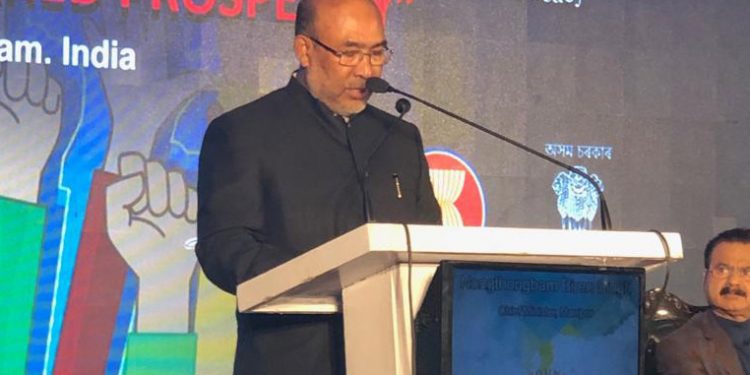 The foreign and domestic investors have been urged by Manipur Chief Minister N Biren Singh to come and invest in Manipur, officials sources said.

Manipur CM N Biren Singh made the request and assured that the state would make all possible efforts for safe and productive investments in the state.

The request and appeal was made during the 2nd ASEAN –India Youth Summit held under the theme “Connectivity is the pathway to share prosperity” in Guwahati, Assam on Sunday, the source said.

In his speech during the gathering, N Biren said that Manipur shares strong cultural affinities with Myanmar and other ASEAN countries.

Such characteristics present huge potential for partnership in cultural tourism.Investments in infrastructure, skill development and film production have great potential while simultaneously promoting traditional and cultural art forms, and generating employment for the youth, he added.

Mentioning that the government of Manipur believes in engaging actively to collectively create synergies and build mutually supportive relationships transforming the lives of the people in the regions and reshaping the geopolitical and economic landscape in the ‘Asian century”, he further stated that the synergies created by the “India-Myanmar-Thailand” Trilateral Highway and “Kaladan Multi-Modal transport” projects would also transform the region.

Stating that Manipur is in the path of development and the law and order conditions here have improved tremendously, he highlighted that Helicopter services are now operational and Air Ambulance services are being introduced in the State. There is a need to work towards establishing air links directly from Manipur and the North East region to ASEAN countries, N Biren added.

“We are even looking at international helicopter service connecting important regions such as Saigang & Mandalay in Myanmar with Moreh and Imphal in Manipur,” he shared.

The Manipur CM also elaborated that the renaming of India’s “Look East Policy” as “Act East Policy” is reflective of our commitment to deepening its ties with the ASEAN region. Considering the importance of this policy, he mentioned that the State Government has constituted a State Level Committee to aid and advice in the effective operationalization of Act East Policy in Manipur.

It may be mentioned that the 2nd ASEAN-India Youth Summit is being organised by India Foundation in collaboration with Ministry of External Affairs, Government of India.