Assam Governor Prof Jagdish Mukhi who was on a day’s visit to Goalpara district, asked the Deputy Commissioner and District Agriculture Officer to take the help of Assam Agriculture University and Indian Council of Agricultural Research (ICAR) to carry out a scientific study to boost agricultural production of the district.

In his maiden visit to the district, Governor Prof Mukhi who undertook a flurry of activities said that the economy of Goalpara is primarily agrarian where around 90 per cent of the people depend on agriculture for their livelihood.

“An exhaustive scientific study to increase agricultural produce of the district would augur well in uplifting the socio-economic status of the people of Goalpara besides strengthening the economy of the State,” the Governor said.

Prof Mukhi further maintained that Goalpara which is known worldwide for its potential in growing areca nut and banana besides other cash crops, a joint study by the two institutions of repute would lend fresh lease of life to the district’s agriculture landscape.

He also reviewed the progress of different central schemes for the district and asked the Deputy Commissioner Ghanshyam Dass and heads of departments to showcase their administrative acumen and best of their sincerity to make Goalpara an ideal district in the field of scheme implementation relating to social securities of the people. 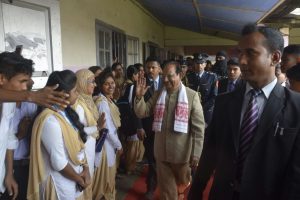 The Governor also laid emphasis on doubling the farmers’ income besides multiple cropping on a same plot of land.

Prof Mukhi also interacted with the representatives of various social organisations and members of the media and took suggestions from them relating to the welfare of all sections of the people of the district.