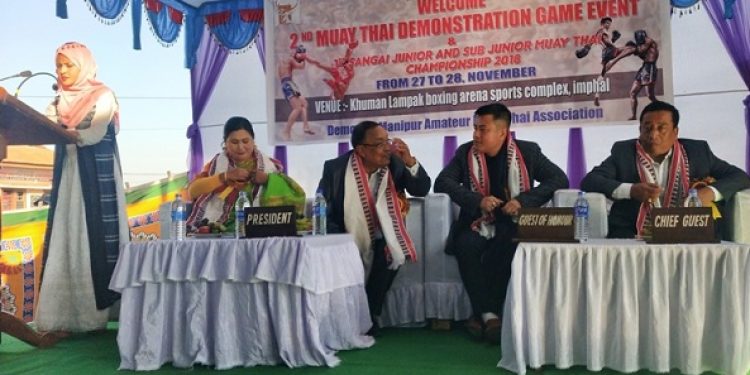 A two-day 2nd Manipur Muay Thai Demonstration Games and 1st Sangai Junior and Sub Junior Muay Thai Championship 2018 was inaugurated in connection with the ongoing 10-day Manipur Sangai Festival 2018 which is underway at various places since November 21 at the Boxing Arena of Khuman Lampak Sports Complex, Imphal on Tuesday.

The event is being organised by the Department of Youth Affairs & Sports, Government of Manipur and Manipur Amateur Muay Thai Association (MAMTA) Manipur.

Speaking on the occasion, Forest and Environment Minister Thounaojam Shyamkumar said Manipuris are genetically blessed with talent and are fast learners in any field specially sports.

Stating that “we should be proud of our natural talent,” he advised the youngsters to learn good form of arts to make the State proud.

Shyamkumar assured that the required arena/ring for the players of MAMTA would be provided after consultation with the Department of Youth Affairs & Sports.

He further assured that all the other requirements of the MAMTA will be fulfilled at the earliest by the State Government.

Stating that the State is proud of its players, he said Mary Kom has once again made the State as well nation proud by becoming the first female boxer to win 6 gold medals at World Championships. He extended good wishes to achieve her dream goal which is to win an Olympic gold medal.

He said discipline, hard work, good character, confidences are some of the key factors to become a good sports person and excel in life.

He motivated the Muay Thai players of the State to work harder to shine in the field of martial art/combat sport that has originated from Thailand.

The Muay Thai or Thai boxing is a combat sport of Thailand that uses stand-up striking along with various clinching techniques and it is known as the ‘art of eight limbs’.

It is characterised by the combined use of fists, elbows, knees, and shins. The professional league is governed by The Professional Boxing Association of Thailand (PAT) sanctioned by The Sports Authority of Thailand (SAT) and World Professional Muaythai Federation (WMF) overseas.