Modi thanks Arunachal student for excellent review of his book

While addressing the nation in the Mann Ki Baat programme, Modi stated that she had asked him to write more inspirational content for parents and teachers also for the second edition of his book ‘Exam Warriors’.

In her letter to Modi, Tayeng mentioned that she had read the book more than twice and found it to be quite useful for students. 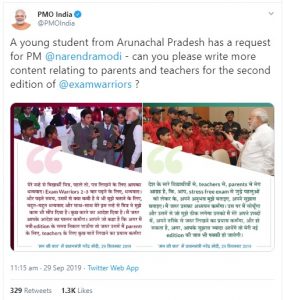 “My little student friend, first I would like to thank you for writing a letter to me regarding my book,” Modi said.

“Thank you for reading Exam Warriors 2-3 times,” he added.

“Thank you also for mentioning about the shortcomings in my book and suggesting some tips for its improvement. I shall surely fulfill your wishes,” Modi further added.

“As you said if I get the time to bring out a new edition of the book, I shall surely try to write something for parents and teachers too,” he said.

“I also request all students, parents and teachers across the country to give me suggestions relating to stress free exams, Modi further added.

“After going through it, I shall try to include it in my own words and if more suggestions come, the new edition of the book may see the light of day,” he also said.

In an exclusive interview with All India Radio, Tayeng thanked the Prime Minister for considering her suggestions.

She said that she found useful methods of dealing with examination stress while reading the book and found one shortcoming that it did not contain much information for parents and teachers.

She also added that she downloaded the Narendra Modi app and wrote a review of the book which had been acknowledged by the Prime Minister himself who later also promised her  to consider her suggestions while bringing out a new edition of Exam Warriors.