In the last four years, the BJP government at the Centre, has worked for greater recognition, and spread of Indian culture and traditions, far and wide, says PM 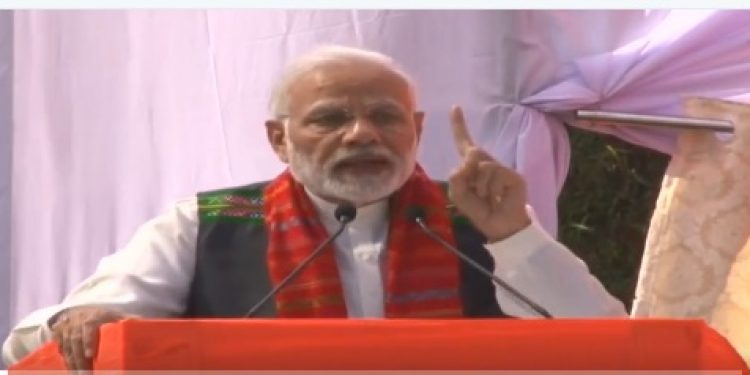 Prime Minister Narendra Modi on Friday slammed Congress for allegedly ignoring development in Mizoram and said that the Northeast has moved beyond shutdowns, guns and blockades.

Addressing an election rally at Lunglei in Mizoram, Modi said, “The Northeast has moved beyond guns, shutdowns and blockades. Today everyone is experiencing it from Itanagar to Aizawl, from Kohima to Kamrup.”

“In the last four years, the BJP government at the Centre, has worked for greater recognition, and spread of Indian culture and traditions, far and wide,” he said.

“Its work culture has caused many projects to be delayed, leading to crumbling infrastructure in the state. However, the neighbouring states have excellent roads,” he said.

Taking a dig at the Congress, PM Modi said that the work culture of the Congress is not development. Its culture is to “delay, halt and divert…For them corruption is the medium of politics,” he alleged.

Highlighting his government’s “Act East and Act Fast for India’s East” PM Modi said, “In the last four and half years, the BJP at the Centre has been working on ‘Act fast for India’s East’. And we have developed every region of the Northeast.”

The Prime Minister also took a dig at the Congress for being confined to only two to three states where it is in power.

“The Congress which once governed most of the Indian States is now restricted to just two or three states. Now, the people of Mizoram, have a golden opportunity to rid themselves of this Congress culture,” he said.

Describing the Congress’ policies as “divide and rule”, PM Modi said “after decades of exploitation at the hands of the Congress, it is now that the people of the country have understood their formula. For them, only the chair matters.”  The 40-seat Mizoram Assembly will go to polls on November 28.