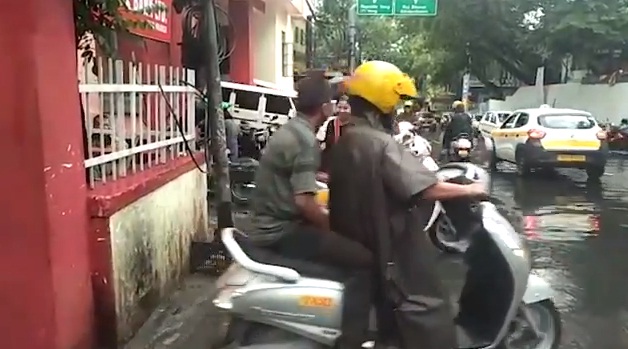 In Aizawl, two-wheeler taxi services are the quickest ways to reach your destination in time. Photo: Sangzuala Hmar

“I was jobless, luckily the local administration gave me a two-wheeler permit in 2017, now my family is doing quite well, by our own little standard, cutting maintenance costs, I make about a 1000 a day,” Lalrinpuia, a scooty taxi owner said.

The idea to launch two-wheeler taxi in Mizoram at par with Goa came in 2016 and it was finally launched in August 26, 2017.

“The traffic congestion in Aizawl often makes people late for work and affects the routine of doctors and nurses who have two-three hospitals to report to. It has become a huge success. Apart from easing commuting pains of Aizawl commuters, the bike taxis have solved problems of unemployment to a great extent,” John Rotluangliana said.

So far about 250 two wheeler taxi permits have been issued by Mizoram transport department till date. However, the minister is apprehensive that issuing too many permits will create another traffic chaos in Aizawl.

Two wheeler taxis charged passengers Rs 10 for the first kilometre and Rs 5 for every subsequent kilometer, as per the government fare structure.

John Rotluangliana said that the decission to introduce two-wheeler taxi was an attempt to ease Aizawl from traffic congestion and a creation of employment for numerous jobless youth. “There has been a long-standing appeal from the All Mizoram Educated Unemployed Association to relax the government rules to let two-wheelers to be used as taxis,” John Rotluangliana said.

Seeing the success of two wheeler taxis in Aizawl, there are lots of demands from districts authorities also to allow two wheeler taxis. However the state transport authority said the decision was in the hands of their political higher ups.

STA Member Secretary and Transport Director R Remmawia said thoughts are being given to allow two-wheeler taxis to ply in the other districts of Mizoram.