Over one lakh party drug worth Rs 3.50 crore seized in Mizoram 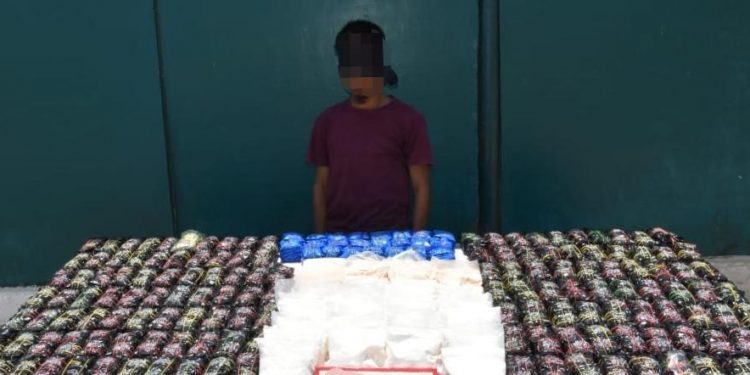 Over one lakh tablets of Methamphetamine, also known as party drugs, worth Rs 3.50 crore were seized from a person in eastern Mizoram’s Champhai district bordering Myanmar.

Acting on a tip-off, Aizawl battalion of paramilitary Assam Rifles launched a joint operation with the officials of Directorate of Revenue Intelligence in the Diltlang area of Champhai district late Saturday evening and seized one lakh of Methamphetamine tablets from the custody of a drug peddler.

In a separate action, the Assam Rifles troopers have seized 80 bags of Areca Nuts valued at Rs 11.24 lakh from Melbuk areas in the same Champhai district and arrested a person.

The arrested smugglers along with recovered items, smuggled from neighbouring Myanmar, were handed over to Custom Prevention Force.

An Assam Rifles’ press statement said, “Ongoing illegal drug trades are a major cause of concern for the state of Mizoram. Assam Rifles, rightly christened as the ‘Sentinels of North East’ have been successful in launching such operations against the illicit smuggling in Mizoram.”

Methamphetamine tablets (also called Yaba tablet or party tablet) contain a mix of methamphetamine and caffeine and are misused as high-dosage drugs in India, Bangladesh and neighbouring countries.

According to the Border Security Force, Assam Rifles and intelligence officials, Yaba tablets and other drugs are smuggled into the northeastern states from neighbouring Myanmar and then smuggled to Bangladesh, Sri Lanka and various Indian states.

Although Mizoram’s international border with Bangladesh and Myanmar and inter-state borders with Tripura, Assam and Manipur are sealed in view of the Covid-19 outbreak, smuggling of various drugs, arms and ammunition and other contraband is still going on.