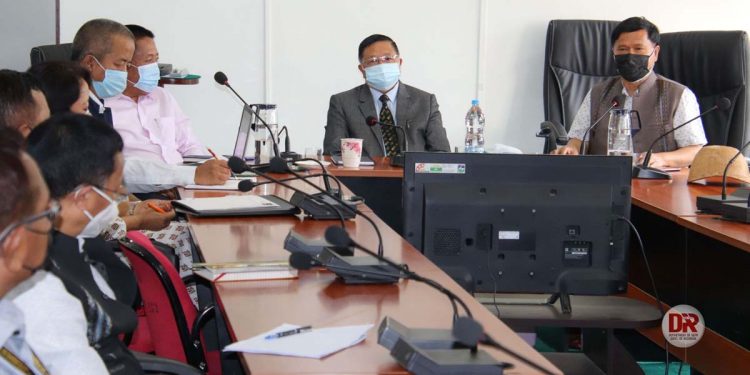 The Mizoram government has served a show-cause notice to the medical superintendent of state-run Zoram Medical College (ZMC) and Hospital over issuance of a notification over payment for oxygen.

The state government in the notice issued on Thursday sought an explanation from the ZMC superintendent why he did not approach the concerned authority before issuing a notification that all the Covid19 and non-Covid19 patients at the medical college would require to pay for oxygen.

The health official was asked to reply to the show-cause notice on or before May 12.

The show-cause notice has been issued by state health secretary Lalramnghaka.

The notice said Dr. HC Laldina, the medical superintendent of the State Referral Hospital at Falkawn, issued an order on May 4 wherein it was ordered that all the Covid19 infected and non-Covid19 infected patients were required to pay fee for usage of oxygen, ventilator or HFNC and the amount so realized is to be debited to Rogi Kalyam Samiti (RKS) account.

As any order under RKS has to be referred to the executive committee and governing board as the case may be, the official was directed to clarify whether approval of the authorities was obtained or not, it said.

“Since, charging fees for usage of oxygen and HFNC/ventilators at the government Hospital especially during COVID-19 pandemic being a policy matter of government, you are hereby directed to clarify reasons for not approaching the government before issuance of the said order,” it said.

The reply to the show-cause notice may reach the health secretary’s office on or before May 12, it said.

As for usage of ventilator or HFNC, Rs 120 per hour will be charged from Covid19 positive patients, the order had said.

However, the order was revoked by the state government on Wednesday.

Meanwhile, medical operational team chairman and ruling Mizo National Front (MNF) MLA Dr. ZR Thiamsanga said the team had made a proposal to the state government to appeal to government employees that they should donate part of their salaries to fight against Covid19.

Thiamsanga’s clarification came amid criticism on the state government which came from different quarters for its proposed move.

The medical operational team, which comprises medical experts from both the state government and private hospitals, was set up last year to deal with Covid19.

Health minister Dr. Lalthangliana on Thursday convened a meeting of officials, community leaders and representatives of churches and civil society organisations to review the Covid19 situation especially setting up of government Covid19 Care Centre (CCC) or Community Covodi-19 Care Centre (CCCC) across the state to cope with facilities crunch, an official said.

The meeting pointed out that there are at present 36 CCCs across the state, including 11 in Aizawl district, with a total capacity of 2,045, he said.

There are 2 paid CCCs in Aizawl, which can accommodate 41 patients, he said.

Apart from the existing 10 CCCCs in Aizawl, efforts are on to set up other such facilities in the state, the official added.