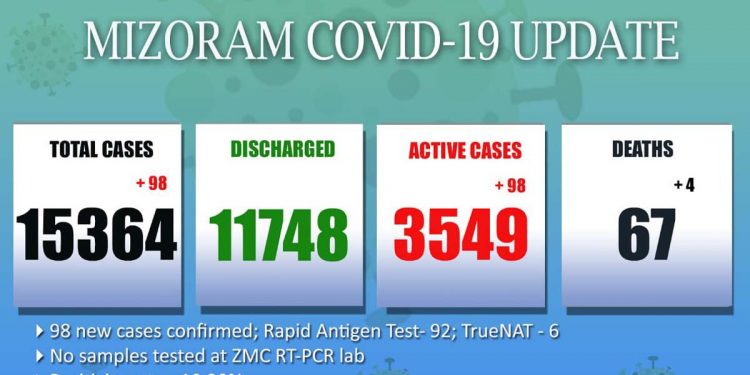 State information and public relations department, which handles the Covid19 tally, said four persons, aged between 42 and 91 years, died within a span of 10 hours between Sunday and Monday.

All the victims belonged to Aizawl district, it said.

The department said 951 samples were tested in the last 24 hours and the positivity rate was 10.30% as 98 people have tested positive for the infection out of the total samples tested.

More than 25 children were among the newly infected people, it said.

Two patients have travel history, while the remaining 96 were found to have locally contracted the infection, it said.

A total of 83 patients have developed Covid19 symptoms and the remaining 15 are asymptomatic.

Mizoram currently has 3,549 Covid19 active cases while 11,748 people have recovered from the infection, including 203 on Sunday.

According to state immunisation officer Dr. Lalzawmi, a total of 2,85,982 people have been inoculated till Saturday, of which 53,226 people have received both doses of Covid19 vaccines.