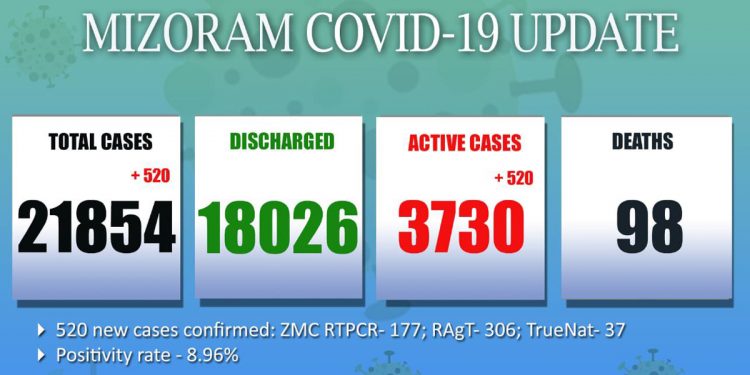 According to the Covid19 bulletin, released by the department of information and public relations, Mizoram, of the new cases, 177 were confirmed during RT-PCR test in Zoram Medical College (ZMC).

In the last 24 hours, a total of 2,161 samples were tested in the RT-PCR laboratory of ZMC.

A total of 286 samples were tested at TrueNAT laboratories and a total of 3,354 Rapid Antigen Tests were done in the last 24 hours.

The state’s positivity rate stands at 8.96%.

The number of positive cases detected per 1,000 population was 20.

Mizoram reported no death due to Covid19 infection on Tuesday.

So far, a total of 18,026 people have recovered from the deadly disease.

Mizoram currently has a total of 3,730 active cases.

The deadly disease has claimed the lives of 98 in Mizoram so far.