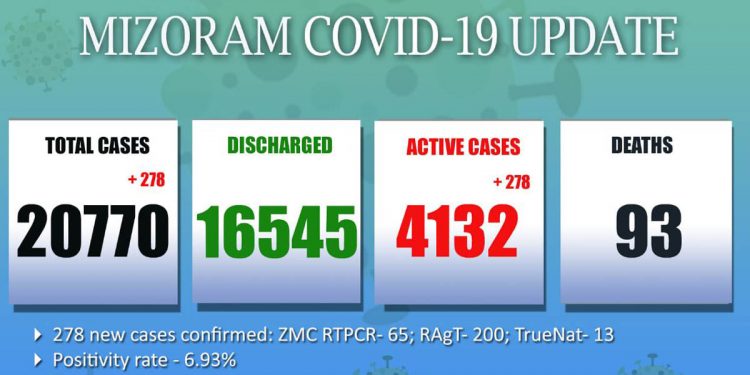 According to the Covid19 bulletin on Friday morning, released by the department of information and public relations (DIPR), of the new cases, 65 cases were confirmed during RT-PCR test in Zoram Medical College (ZMC), 13 were found positive during TrueNAT test while 200 were confirmed during Rapid Antigen Tests.

The new cases were confirmed out of 1,015 tests for Covid19.

The state’s Covid19 positivity rate stands at 6.93% while the number of positive cases detected per 1,000 population is 19.

Of the new 278 cases, 13 are inmates of Aizawl central jail and 52 are children.

The 278 new cases were reported from various districts with Aizawl reporting the highest number of cases (167), followed by Kolasib (34) and Hnahthial (26), said an official.

Seven patients have travel history while the rest 271 were found to have locally infected.

A total of 131 patients have developed symptoms of Covid19 and 147 are asymptomatic, the official said.

So far, a total of 16,545 people have been discharged in Mizoram after their recovery from the disease.

Mizoram currently has a total of 4,132 active Covid19 cases.

The deadly disease has claimed a total of 93 people in Mizoram so far.

Meanwhile, a total of 7,892 doses of Covid19 vaccine were administered in Mizoram on June 29.

A total 5,75,780 doses of vaccine have been administered in Mizoram during January 16-July 1.