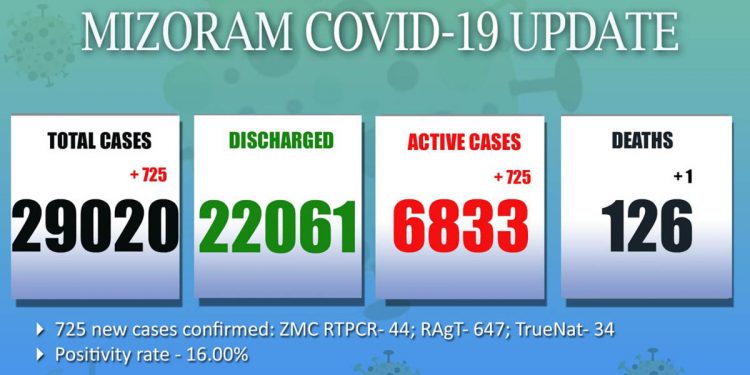 Mizoram continues to register spike in Covid19 cases as 725 more people tested positive for the virus in the last 24 hours, pushing the state’s tally to 29,020, a health department official said on Wednesday.

Of the 725 cases, 111 were detected during mass testing drive held in six localities or pockets within Aizawl Municipal Corporation (AMC) area, the official said.

More than 138 children were among the newly-infected people, he said.

According to the official, 342 patients were diagnosed with Covid19 during contact tracing and it is to ascertain how the remaining 383 patients contracted the virus.

Of the 725 patients, 651 patients have developed symptoms of Covid19, he said.

Mizoram now has 6,833 active Covid19 cases while 22,061 people have recovered from the infection, including 373 on Tuesday, he said.

According to state immunisation officer Dr. Lalzawmi, over 6.11 lakh people have been inoculated till Tuesday.