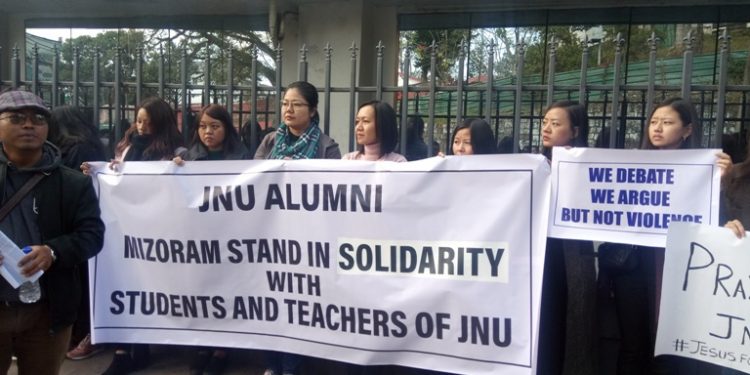 Former students of Jawaharlal Nehru University (JNU) in Mizoram on Friday staged a demonstration to extend solidarity to those students and teachers, who have been brutally assaulted on Sunday night.

About 50 people took part at the solidarity protest held in front of Vanapa hall in Aizawl.

The alumni strongly blamed the brutal attack on students and teachers by a masked mob in the JNU campus on January 5 last and demanded stringent punishment against the persons involved.

“We are appalled by the way students an d teachers got beaten up with iron rod, hammer and stick by masked goods who purportedly happened to be associated with ABVP,” Lalthuama, one of the alumni said.

He said that the brutal attack on the country’s top university was an insult to the entire nation.

The agitating alumni said that the recent attack on various education institutions across the country like Jamia Millia ISlamia, Aligarh Muslim University and JNU, among others, was an attempt to stifle dissenting voice in democratic space like universities and research institutes by some group of people who have close connection with the ruling political regime.

According to them, the brutal attack on education institutions in different parts of the state reflecs the apathy of those who are in power towards places of higher learning and research, which allegedly gradually undermining the academic environment to build a progressive and tolerant society.

The JNU alumni in its statement said that they strongly disbelieve in violence and confrontation as a solution to reconcile difference in a plural society like India.

“We kindly request those who are in power to try and make the JNU community feel safe within the campus and elsewhere. We would also like to reiterate that the Alumni of JNA, Mizoram firmly stand in solidarity with the whole fraternity of the JNU in this time of crisis,” the statement said.