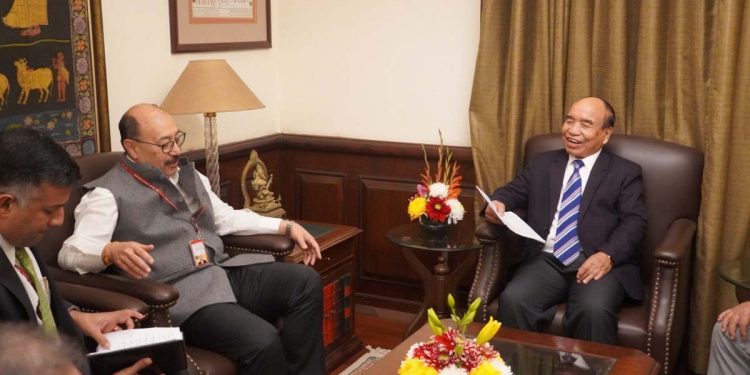 The Mizoram government has sought the Centre’s intervention for early completion of a cross-border road under the ambitious Kaladan Multi-Modal Transit Transport Project (KMMTTP).

Official sources said on Thursday that chief minister Zoramthanga, who is currently in New Delhi, met foreign secretary Harsh Vardhan in the office of the ministry of external affairs on Wednesday evening and discussed with him about the ongoing project.

Though the project is nearing to completion, Zoramthanga pointed out that the construction work in Myanmar side is slow and steady.

He urged the centre to expedite the construction of the cross-border project in Myanmar side and sought the government’s intervention for early completion of the project, sources said.

During his meeting with Vardhan, Zoramthanga talked about the importance of strengthening the Indo-Myanmar ties which will benefit the Zo communities of both Mizoram and Chin state of Myanmar.

He asked the centre to facilitate easy pass across the border to strengthen trade between Mizoram and Myanmar.

The KMMTTP is a bilateral project of the India and Myanmar governments to connect both the countries by sea route and road transport.

Launched by the erstwhile UPA government in 2008, the projected when completed would first link the eastern Indian seaport of Kolkata to Sittwe seaport in Myanmar across the Bay of Bengal, a distance of 539 km.

From Sittwe, the route will continue over river Kaladan to the western Myanmarese town of Paletwa.

Paletwa will then be connected to the India-Myanmar border by a 110-km-long road.

The international border will then be connected by road with southernmost Mizoram’s Lawngtlai town 87.18 km away from where National Highway 54 passes by.

The construction of the road component in the Mizoram side began in 2010 and is being worked by two companies – RDS Project Limited and Odisa based Atlanta ARSS (JV).

State PWD officials said that more than 82 percent of work of the project has been completed so far.

Though the project is scheduled to be completed by March this year, it can get delayed due to compensation row.

Lawngtlai District Land Owners’ Association, an umbrella association of landowners along the cross-border road in Lawngtlai district, had served a stay order to the two constructing agencies on January 13 after the state government allegedly cancelled the Detailed Project Reports (DPR) for compensation amounting to more than Rs 50 crore.

The stay order, however, was revoked on January 14.

The association in its meeting on Wednesday said that it would intensify the demand for immediate release of compensation to about 303 landowners and threatened indefinite strike from March if the government fails to meet its demand.