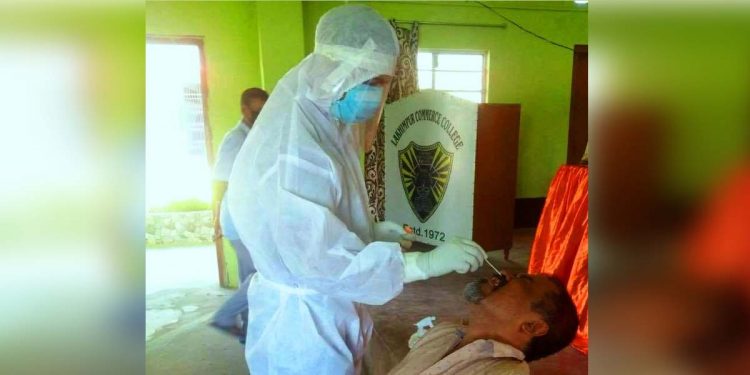 The Mizoram government has announced launch of mass sample testing drive for Covid19 in Aizawl Municipal Corporation (AMC) area during the week-long total lockdown that came into effect on July 18, the health minister said.

During a meeting to review preparedness for the ongoing complete lockdown, health minister Dr. R. Lalthangliana said mass screening drive will be conducted in most Covid19 affected neighbourhoods or pockets within AMC area during the total lockdown.

He said the mass testing drive conducted at a private orphanage and de-addiction centre in Aizawl last month yielded good results and significantly prevented the disease from spreading further.

The mass screening will be conducted at Chhinga Veng, Armed Veng South, Bethlehem Vengthlang, Electric Veng, Tuirial and in the southern part of Saron Veng, he said.

About 50 volunteers have been hired as lab technicians and data entry operators to assist sample collecting team and to meet manpower requirements for the upcoming mass screening, he said.

After a brief lull between December, 2020 and March this year, Mizoram began to register a spike in Covid19 cases since April.

While Covid19 has claimed 11 lives during the first wave, as many as 110 people died due to the infection in just three months during the second wave (From April till July 17, 2021), he said.

The number of Covid19 active cases stood at 5,784 till Monday and 21,582 people recovered from the infection, including 219 people on Monday.

The Covid19 death toll increased to 123 on Monday as a 62-year-old man from neighbouring Assam’s Silchar town died at southern Mizoram’s Lawngtlai district hospital, according to official bulletin.

The Mizoram government has currently imposed complete lockdown in AMC area and some district headquarters to brake the chain of rising Covid19 cases.

Earlier, lockdown-like restrictions were imposed in AMC area and other district headquarters on April 20, followed by complete lockdown from May 10, which was eased in a phased manner from May end.

About 18 days (between June 30 to July 17) after resorting to partial lockdown, the government re-imposed complete lockdown in AMC area and some district headquarters and certain Covid19 curbs in other parts of the state on July 18 following the continuous rise in Covid19 cases.

The existing guidelines are scheduled to be lifted on July 24.