29 people die in Mizoram due to drug abuse this year 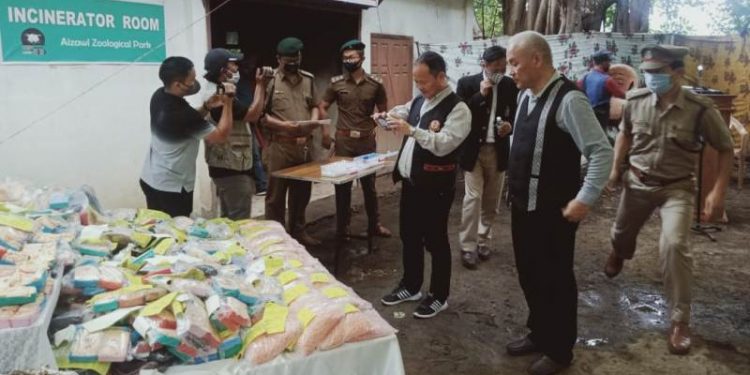 Different types of drugs worth over Rs 9.28 crore seized by state excise and narcotics department were destroyed.

Mizoram chief minister Zoramthanga on Friday made a clarion call to fight the menace of drug abuse in the state.

In a video message on the occasion of international day against drug abuse and illicit trafficking, chief minister Zoramthanga said that not only the world but every household especially the young people are invaded by drug abuse.

“In order to fight the menace and to make the world a living, let us all try our level best to fight against drug abuse,” he said.

The chief minister said that it is a duty and responsibility of every citizen to fight against drug abuse.

Meanwhile, different types of drugs worth over Rs 9.28 crore seized by state excise and narcotics department were destroyed and burnt to ashes by incinerator at zoological park near Aizawl on Friday in view of international day against drug abuse and illicit trafficking.

Mizoram Journalist Association (MJA) president, Zonunsanga Khiangte, who burnt the drugs, lauded the excise and narcotics department for their relentless efforts to curtail the growing menace of drug abuse in the state.

He said that the seizure and disposal of many drugs by the department has saved many lives.

Citing that the service of the excise and narcotics department resemble to serving the God, Khiangte encouraged the officials to make massive efforts to serve the state and the people by fighting against drug abuse.

According to excise and Narcotics commissioner Ngurchungnunga Sailo, the burnt drugs were seized over the past one year between June 26, 2019 and June 25, 2020.

He said that the drugs were disposed of or burned based on section 52 ‘A’ of “The Narcotics Drugs and Psychotropic Substances Act, 1985” in accordance to the Centre’s notification and subsequent approval by a court.

He said that officials and staff of the department are working relentlessly to check the menace of drug abuse despite man power crunch.

According to the department’s record, at least 29 people, including 3 females, have died of drug abuse in Mizoram this year till June 26.

So far, a total of 1,608 people, including 190 females have died due to substance abuse since 1984 when the first drug-related death due to heroin was reported in the state, the record said.

Spasmo-proxyvon or Parvon spas was the main killer drug until 2015 when heroin took its place.

More than 330 people have been arrested in drugs and alcohol related cases between March 22 and May 31 this year and majority of them were released on personal bond to decongest jails in view of coronavirus spread.

Mizoram is sandwiched between Myanmar and Bangladesh, with which it shares about 722 km long international border and most drug supplies, came from Myanmar.