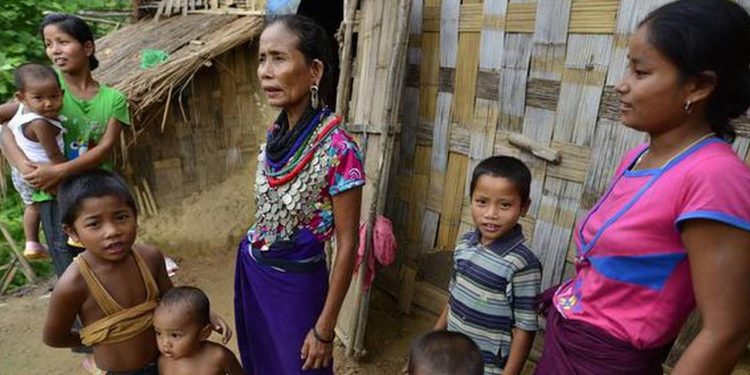 A file image of Bru refugees. Image credit: The Hindu

The Mizoram Assembly on Friday unanimously adopted a private member resolution endorsing the Centre’s decision to allow over 35,000 displaced Bru people to settle permanently in Tripura.

“The Brus migrated from Bangladesh, Tripura and Assam’s Cachar district in search of better livelihood in the state,” Sailo said.

He said that the Bru people, when their population increased, wanted separate administration and started demanding Autonomous District Council by taking up arms in the early 1990s.

He said that the erstwhile Bru militant group and several Bru associations severed a “quit Mizoram” notice to their people in late 1990s.

They migrated to Tripura fearing communal tension triggered by the murder of a Mizo forest guard in Mizoram-Tripura border Mamit district in 1997.

According to Sailo, the Centre, state government, churches and NGOs of the state have taken several efforts to repatriate genuine residents of the state since 2009 but to no avail.

He said that the number of Bru refugees in six relief camps in Tripura has also shot up in the meantime due to migration from Bangladesh and Assam.

He added that the Centre and governments of Mizoram and Tripura had made at least nine attempts to repatriate the Bru people to Mizoram between 2009 and 2019.

With amendment to the resolution moved by Zoramthanga, the august house unanimously adopted the resolution stating “cutting across party lines, legislators from both the ruling MNF and the oppositions strongly welcome and endorse the fruitfulness of the initiatives taken by the chief minister, churches and NGOs to allow the Bru people, who refused to return to Mizoram on their own, settle permanently in Tripura.”

According to the agreement signed among the Centre, governments of Mizoram and Tripura and Bru associations in New Delhi on December 16, 2019, those Bru families who failed to return to Mizoram on or before November 30, 2019, would settle permanently in Tripura and those who have already returned to Mizoram during repatriation should stay back in the state.

The agreement also said that the Centre would provide rehabilitation to the tune of Rs 4 lakh each to Bru families and land for constructing a house.

The Bru families will also be provided housing assistance of Rs 1 lakh each, Rs 5000 and free ration to each family monthly for two years, which will be given through Direct Beneficiary Transfer scheme.

The Tripura government will conduct identification of the Bru refugees and all the relief camps will be closed down after completion of resettlement.

The agreement also said that a joint monitoring committee headed by a special secretary (internal security) under the Union Home Ministry will be constituted to monitor and oversee the successful implementation of the agreement.

Altogether, there were 11, 847 Bru voters, including 5,786 females belonging to Mizoram, who are currently lodged at six transit camps in Tripura, according to the latest roll published on February 7.

Election officials said that the state government is yet to receive official intimation from Election Commission to delete the Bru voters from the state’s electoral roll.