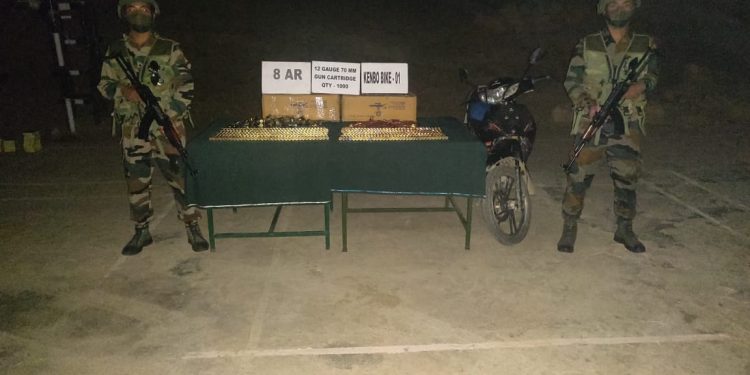 The Serchhip Battalion of 23 Sector Assam Rifles has recovered a large cache of ammunition along with a foreign bike from Zokhawthar in Mizoram’s Champhai district.

A team of Assam Rifles jawans conducted an operation at Zokhawthar in the evening on Friday after receiving information about the movement of a large consignment of ammunition.

A total of two cartons of 12 gauge 70 mm gun cartridges and one Burmese Kenbo bike without any valid documents were recovered during the operation.

According to sources, the team sighted a man on the Kenbo Bike riding towards the Tiau river situated along the Indo-Myanmar border in Zokhawthar.

When the jawans signaled him to stop, the latter abandoned the bike and ran towards the Myanmar side of the international border.

Although the team chased him, they had to stop near the international border as they could not venture into Myanmar illegally.

Meanwhile, the team then seized the arms and bike and handed them over to the Zokhawthar police.