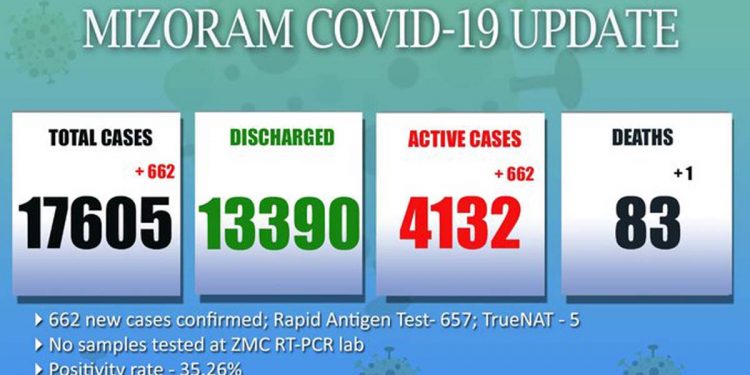 Mizoram‘s Covid19 scenario continues to worsen as the deadly virus entered an orphanage home-cum de-addiction centre located in the northern fringe of Aizawl where 528 new positive cases were detected.

The cases were detected during mass screening at the orphanage on Sunday.

Mizoram medical operational team chairman and Mizo National Front (MNF) MLA Dr. ZR Thiamsanga said 662 new Covid19 cases were reported in Mizoram in the last 24 hours, which is the highest ever single-day spike in the state.

The single-day positivity rate was 35.26%, the highest in the state, as the new cases were detected from 1,877 samples tested on Sunday, he said.

The detection of huge Covid19 cases at TNT has shocked the state.

According to Thiamsanga, the recent detection of Covid19 cases in five inmates of the orphanage have caused concern, which prompted the state government to conduct mass screening at the centre on Sunday.

Thiamsanga said he along with officials from the state integrated disease surveillance programme (IDSP) visited the centre on Sunday at the request of health minister Dr. R. Lalthangliana after five inmates were found infected by Covid19.

“During an interaction with the management of the centre and contact tracing on Sunday, we were of the belief that the virus could have spread to other inmates on a large scale, which prompted us to conduct mass screening on the day itself,” he said.

The rehabilitation centre has survived for about 30 years on public contribution and help from NGOs, generous people and sometimes from the government.

Thiamsanga said that 989 samples were tested during mass screening at the centre on Sunday and 53.38 per cent of them came out as positive for Covid-19.

He said that about 150 patients have developed mild symptoms of Covid-19 and the rest were asymptomatic.

Meanwhile, Aizawl district administration has declared Muanna Veng as a containment zone and converted some compartments of the centre into Community Covid-19 Care Centres (CCCC).

The state government has also appointed some officials and local leaders to specially monitor the TNT centre under the supervision of medical operational team on Covid-19.

A high-level meeting will be held on Monday afternoon to specifically review the Covid-19 scenario of TNT centre, Thiamsanga said.

Meanwhile, an official statement said a total of 662 new cases were reported in the state in the last 24 hours with Aizawl registering the highest number of cases at 639, followed by Kolasib district at 11.

A total of 13,390 people have recovered from the infection.

The death toll in the state climbed to 83 as two more persons have succumbed to the infraction in the last 24 hours.

According to state immunisation officer Dr. Lalzawmi, 3,70,107 people have been administered the first dose of Covid19 vaccine till Saturday and of them, 53,517 people have received both the doses.