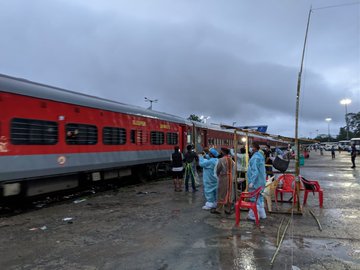 At least 1,436 people stranded in Delhi and other north Indian cities have returned to Mizoram on Sunday.

An official statement issued early Monday morning said the stranded people arrived at Bairabi railway station on the Mizoram-Assam border around 12:30 am in the intervening night of Sunday and Monday.

The returnees were transported by buses to their respective states after being screened at the railway station.

Officials said more than 6000 people have returned from different parts of the country after the nationwide lockdown imposed to contain the spread of novel coronavirus since March 25.

Apart from about 700 people enruote to Mizoram from Goa, thousands of people are yet to return to the state, they said.

Officials of state Health department also said that a total of 777 samples have been tested and more 8000 Rapid Antibody Tests have been conducted till Sunday.

115 samples tested on Sunday have come out as negative, they said.

“Every struggle becomes a thing of beauty when carried out with love, joy and dedication. Seen here are the hard working administrative staff from Kolasib district with their deputy commissioner welcoming with warm hearts, their stranded brethren and sistren at a railway station,” Zoramthanga said in his official twitter handle where he attached photographs of officials awaiting stranded people at midnight.

“Glimpse of dedicated officials in Aizawl toiling hard days and nights catering to the needs of every returning stranded Mizos. Frontliners everywhere are risking their lives as well as the lives or their loved ones for the safety of Mizoram and ours. I pray for their well being,” he said in another tweet.