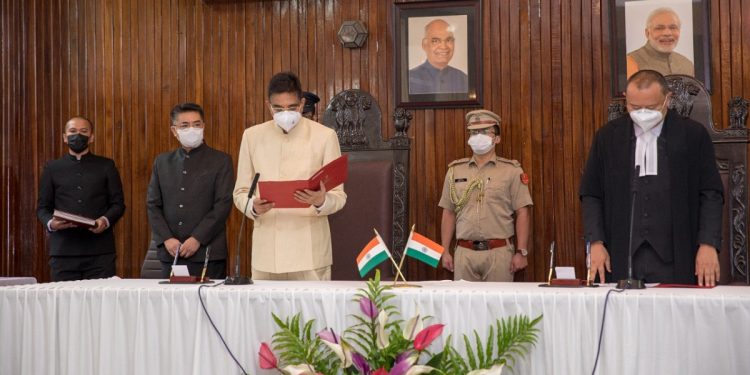 Senior BJP leader and former Lok Sabha MP from Andhra Pradesh Dr Kambhampati Hari Babu was sworn in as the new Governor of Mizoram on Monday.

He is the 22nd Governor of Mizoram after it attained statehood in 1987.

Hari Babu replaced PS Sreedharan Pillai, who has been transferred as the Governor of Goa.

Due to the Coronavirus induced total lockdown being in placed in the state capital, the swearing-in-ceremony was attended by only a handful of special invitees, including Chief Minister Zoramthanga and his cabinet colleagues, state Chief Secretary, Director General of Police (DGP)and leaders of political parties and leading NGOs.

Born in 1953 at Thimmasamudram of Andhra Pradesh’s Prakasam district, Hari Babu graduated as B Tech in Electronics and Communication engineering from Andhra University and obtained master degree and doctorate degree in electrical and control systems from the same university.

He was elected to Andhra Pradesh Legislative Assembly from Visakhapatnam-I seat in 1999.

He became the president of Andhra Pradesh State BJP in 2014 and eventually got elected to the 16th Lok Sabha from Vishakhapatnam in 2014.

Prior to his appointment as the Governor of Mizoram, Dr Hari Babu was BJP’s National Executive Member (2018-2021).