Defending champion Aizawl FC is hopeful for a strong comeback when they play their third home match of the I-League against high flying Minerva Punjab FC in Aizawl at the Rajiv Gandhi Stadium later on Wednesday.

Minerva Punjab FC are visibly confident with an unbeaten home run which has earned them 13 points from five matches.

Aizawl FC, on the other hand, kicked off their campaign with a 1-0 win over Churchill Brothers but lost to Shillong Lajong in their second game.

Minerva Punjab FC coach Khogen Singh is well aware of their position in the league and he stressed on keeping the focus on the match.

“We will try to continue this form until the end of the season. But our fixtures will be tougher as playing in away matches and I have experienced this as a player myself. Aizawl will be a tough opponent but i hope we can end the season in our current position,” the Minerva coach said. 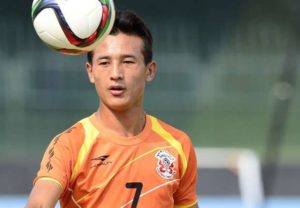 Chencho made the difference in their last match having scored the solitary goal of the match against Indian Arrows.

“It is my first season in India and it is quite different to Bhutan. I want to score as many goals possible and be the best player in the league. Lifting the Hero I-League with Minerva is my main aim and I hope we can achieve that as a team,” said a confident Chencho.

Meanwhile, Aizawl FC captain Alfred Jaryan feels they are a different team as compared to last season title winning side.

“As compared to the last season, we are a completely peculiar side. The coach is different and our styles and tactics are also different. But there are still a lot of matches to be played and I hope we can finish the season in a good fashion,” he said.