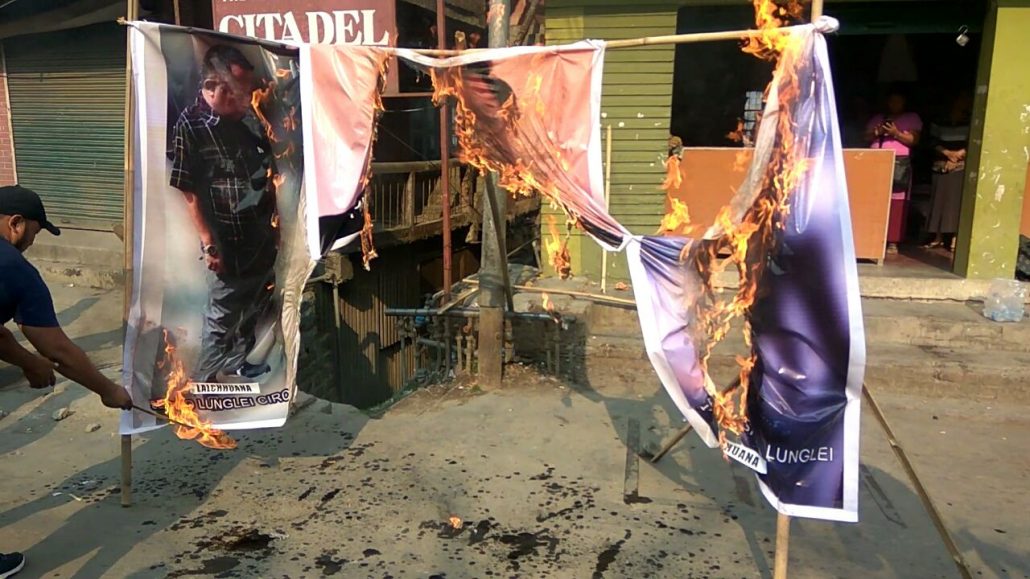 Effigy of PWD Minister Lal Thanzara and two engineers were burnt by Lunglei Thalai Pawl at a demonstration held on Monday against the failure to deliver better road between Pukpui village and Tlawng River in Lunglei district.

Along with the PWD Minister, effigies of PWD Southern Circle SE Lalchhuana and PWD Road Division EE C Lalchhuana were burnt at Venglai locality in Lunglei.

The demonstrators, a local watchdog organization of youths, the Lunglei Thalai Pawl also lodged an FIR at Lunglei OC demanding that action be taken against the engineers who had squandered the Pukpui to Tlawng River on National Highway no. 302.

“We have appealed to the engineers several times, they have been giving us false promise, it is heartbreaking to see the condition of the roads which the PWD has claimed it as repaired, you can peel the bitumen with a scratch,” General Secretary of Lunglei Thalai Pawl J Lalzawmliana said.

The Lunglei Thalai Pawl demanded that the engineers who were responsible be remanded before their proposed transfer orders were out.

The demonstrators passed a resolution demanding the suspension of the engineers responsible and an instant release of Rs. 250 lakhs road maintenance fund allocated for Lunglei to South Kanhmun national highway.