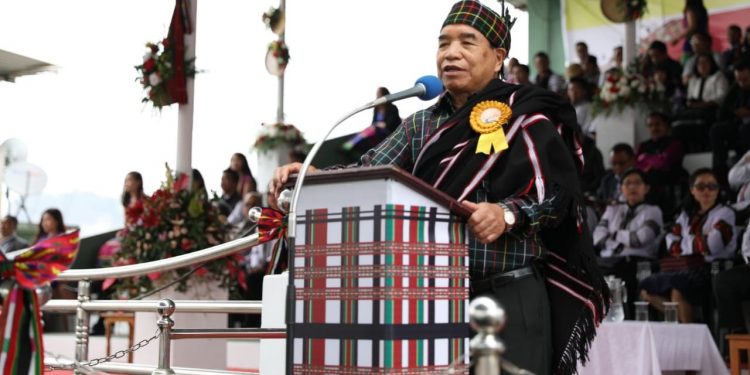 Mizoram chief minister Zoramthanga on Friday called upon the people to promote Mizo moral code and tradition as Mizoram celebrated Chapchar Kut for the second day.

Beginning from Thursday, Mizoram’s biggest and most important festival – Chapchar Kut was celebrated across the state with cultural fervour.

He also urged the people to discover the essence of Mizo culture and spirit of unity while celebrating the festival.

“The light of gospel, Mizo moral conduct of perseverance and voluntary service and the blessing that we received from the almighty should be shined not only among us but to the outside world,” he said.

Zoramthanga was the Kut Pa or father of festival on the occasion.

Art and culture minister R. Lalzirliana, who was the chief host of the festival also expressed desire that the festival brings unity among different tribes of Mizos in India and abroad.

The two-day Chapchar Kut celebrations, which began on Thursday successfully concluded on Friday amidst cultural fervour and gaiety. The celebrations were held across the state.

In Aizawl, where the grand celebration was held, one of the most eye catching performance of the festival was “Cheraw” (bamboo) dance performed by 95 YMA branches across the capital.

Many cultural items and folksongs recalling the history and traditions of Mizos, were also performed.

“Chhawnghnawh”, a pre-Christian custom of stuffing a boiled eggs into each other’s mouths was also revived in the festival.