BJP gearing up to consolidate its position in Mizoram: Ram Madhav 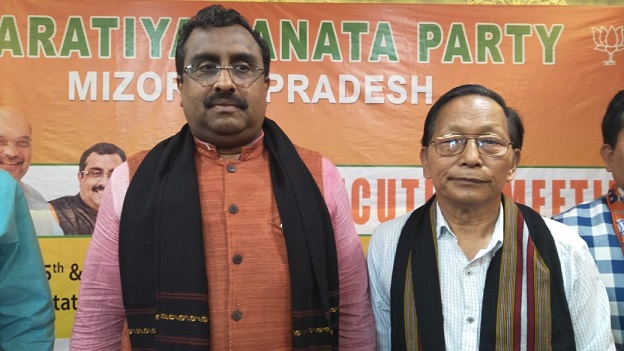 BJP national general secretary Ram Madhav on Wednesday said the party has started preparing their ranks and files for the coming Mizoram election. He appealed to the people of Mizoram not to fall prey to the baseless religious non-tolerance allegations levelled against the BJP by the Congress.

Addressing a press conference here Ram Madhav said the BJP has begun groundwork to establish its presence in Mizoram, the only state among the northeast’s ‘Seven Sisters’ where it is yet to consolidate its position.

“We have called on all the cadres of Mizoram BJP and took stock of the party’s situation in the state. Among the northeastern states Mizoram is our unfinished agenda and we will be completing this agenda in the coming election,” Ram Madhav said.

Elections to the 40-member assembly are due at the end of the year, along with assembly polls in Rajasthan, Madhya Pradesh and Chhattisgarh.

“After the end of heavy monsoon in August, we will form booth-level committees. The plan is to identify key issues to reach out to voters. We will tell the people of Mizoram that they deserve better than what Lal Thanhawla has given in three decades,” Ram Madhav said.

Ram Madhav said despite being the most peaceful state in the northeast, Mizoram is still lagging behind in terms of development because of the misrule of successive governments especially the Congress.

“It’s pathetic to see that after 45 years of statehood Mizoram is yet to have basic necessities like power and proper roads. I’ve learnt that there was a tragic road accident along the national highway where more than ten people died, my deepest condolences go to the families; it is sad so many people died because the pathetic road condition,” Ram Madhav said.

“The Mizoram Congress has nothing to level charges on Modiji government and they have been using these anti-Christian allegations against us. I appeal to all the people of Mizoram not to fall prey to Lal Thanhawla’s baseless allegations,” he said.

Denying that the BJP has spent crores of rupees in horse-trading after elections, Ram Madhav said his party did not have that kind of money like Lal Thanhawla, whom he accused of looting people’s money for the past ten years.

According to the BJP leader the party would soon create 100 plus booth level committees who would scout for good people and finished the year with victory in Mizoram.