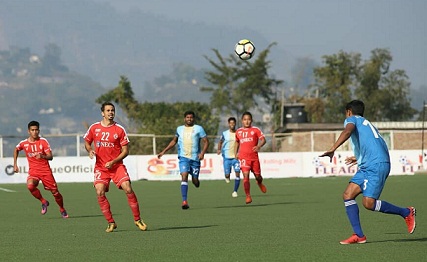 East Bengal managed to salvage a point from their away game at Rajiv Gandhi stadium here in Aizawl. The home side missed several chances in the first half of the match. It was a real test for the red and gold brigade, even though coach Khalid Jamil looked disappointed with the draw, the  statistics said otherwise, Aizawl FC dominated the proceedings and were considered unlucky.

The home team, even though dominated the first half of the match, could not make a breakthrough. Alfred Jaryan was denied again in the 36th minute, his shot was pushed away by East Bengal custodian Luis Barreto.

Aizawl FC came close to score in the 42nd minute when Dodoz’s shot went just above the bar.

East Bengal’s Japanese midfielder managed to give tough times to the Aizawl defenders in the second half. His 54th minute free kick was denied by the woodwork.

The draw took Aizawl FC to fourth position in the I-League table sharing spot with East Bengal with two matches in hand.