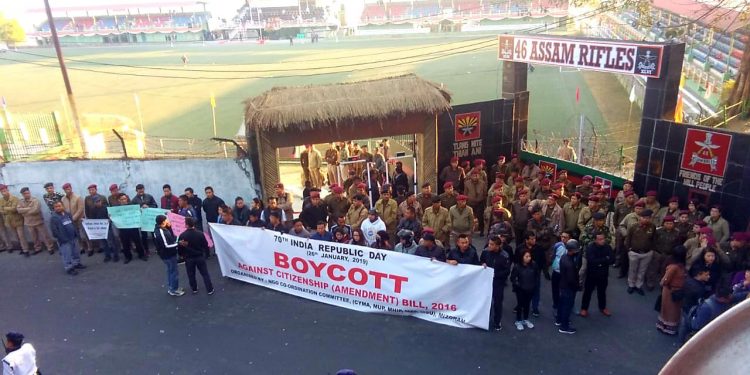 An IAS officer serving in Mizoram has written a strongly worded letter regarding the protest in the state on Republic Day and how protestors prevented government servants from attending the Republic Day celebrations.

A cadre of the Arunachal Pradesh, Goa, Mizoram and Union Territories (AGMUT) wrote in the letter that what had happened in Mizoram ‘was unthinkable in a free country.’

He elaborated that he along with his ‘fellow officers, reached the northern gate of Assam Rifles Ground in Aizawl to attend the 70th Republic Day function at 7 am’.

However, to their ‘shock and surprise’, they were stopped at both the entrance gates and were told by the members of Joint NGO Coordination Committee that we cannot attend the Republic Day function 2019’ and that they should return to their quarters ‘before any untoward incident happens’.

Notably, the joint NGO coordination committee had earlier taken out a resolution boycotting the Republic Day function throughout Mizoram in their opposition to the Citizenship (Amendment) Bill, 2016.

The IAS officer further wrote that, ‘When we tried to reason with them, we were told by the NGO office bearers that the Government of Mizoram has reached an agreement with the NGOs where it was decided that only secretaries to the government of Mizoram and above will be allowed to attend the Republic Day function.’

He further wrote: “We even told them that in a democratic setup, NGOs have the right to oppose the Citizenship Amendment Bill but linking it with the Republic Day Celebrations and not letting the Government officers to attend the Republic Day function is rather unlawful. After waiting for an hour outside the venue and anticipating a law and order situation, we were forced to return with deep pain and anguish.”

The IAS officer went on to allege that none of the duty magistrates and police with all their reinforcements were willing to take any action against the members of Joint NGO Coordination Committee who were forcefully preventing the Government officers and other citizens from attending the Republic Day celebrations. Senior police officers present at the location simply expressed their helplessness at the situation, he further alleged.

“While it is the duty of the Government to ensure that every citizen of India is able to celebrate the Republic Day with freedom and fervour, incidents like this show that we have failed in the most basic of our duties,” Choudhury further wrote.

Through the letter, the IAS officer has also requested concerned authorities to ‘thoroughly investigate the particular incident and take strictest possible action against all involved for publicly boycotting the Republic Day celebrations throughout Mizoram and forcefully preventing the civil servants from attending the Republic Day function in Aizawl’.