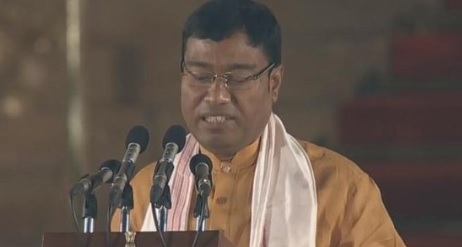 A state which is known for having diverse range of crops, has vast opportunities for harnessing food processing industries, said union minister of State for Food Processing Industries, Rameswar Teli.

Teli said this at Aijal Club in Mizoram capital Aizawl while attending a conclave on Wednesday.

Rameshwar Teli, added, “The entrepreneurs have to play a key part in stepping forward and approaching their ministry for them to provide the technical know-how and likewise aid the locals interested in setting up and achieving such initiatives.”

The union minister further said, “We will be organizing a workshop in Mizoram to raise awareness on the schemes and subsidies available in the food processing industry in the next one or two months.”

Teli said Prime Minister Narendra Modi is keen on developing the Northeast and often advises the Central Ministries to focus on the region and spread awareness on the schemes of various departments available for these states.

He also spoke of the policy decision to earmark at least 10 per cent of plan budgets of the central departments for the development of NE States.

Teli said “The budget which could bring great development for the north-eastern states is not utilized to its fullest potential.”

Facing similar problems in his concerned ministry, Rameswar Teli said, “I have decided to conduct a roadshow in all the eight north-eastern states to raise awareness on the schemes available for the local people, and them to benefit from these small scale ventures.”

“A lot can be done in Mizoram, but, the biggest hurdle comes from banks as they do not readily give out loans, and in this regard we shall help as much as possible,” said Teli.

He said the Govt. of India has made a series of policy announcements but the response has not been satisfactory due to poor communication and lack of awareness.

The Ministry of Food Processing Industries currently runs four schemes in the state of Mizoram including the Mega Food Park which the Union Minister will be visiting on Thursday, next.