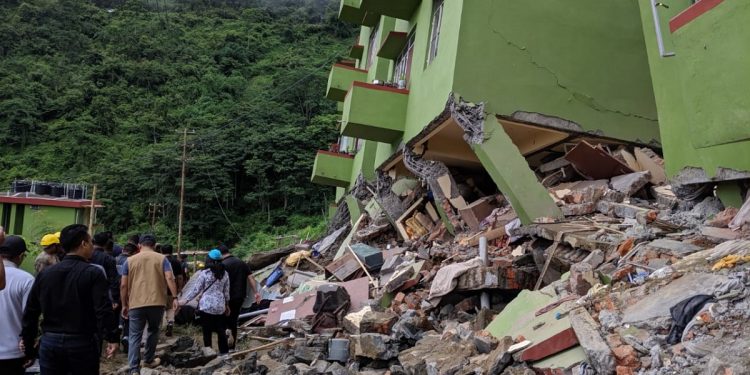 The BJP Mizoram Pradesh members on Thursday visited the site of the Basic Services to Urban Poor (BSUP) Housing Complex, where a massive landslide led to the collapse of three buildings on Tuesday last.

Also read: 3 killed as 3 buildings collapse due to landslide in Mizoram

The party workers under the leadership of former parliamentarian of Hiphei, Dr B D Chakma MLA, Vanlalhmuaka, state general secretary visited the site and handed over Rs 2000 to the family of the deceased and Rs 1000 to each of the inured.

After visiting the site, Dr B D Chakma said, “We just want to express our opinion about todays visit at Durtlang where four buildings collapsed due to the landslide from the back of the building.”

“As per our observation, it is better to have an independent judicial inquiry which would not be under the control of any government for free and fair investigation,” he said.

Whoever is responsible for the disastrous incident, whether it is the nodal department or the contractor, should be punished as per the law, he said.

The BJP MLA also accused the Chief Minister of announcing plans to set up an inquiry committee just to present a good face from the government’s side.

In a statement made on Thursday, the BJP Mizoram Pradesh said according to sources, the concerned department and contractors did not take into factor the safety of the people.

As gelatin bombs were used in huge amounts during construction, the soil structure became loose.

The lack of retaining walls would have also contributed to the present disaster, they said.

This is why we expect an independent judicial inquiry, they added.

B D Chakma commented on the compensation of the government, saying, “As per our information government of Mizoram has declared four lakh rupees for three victims, who have lost their lives.

“This amount is not upto the mark because these days four lakhs is not sufficient. We want to request the government to increase the compensation amount,”Chakma added.