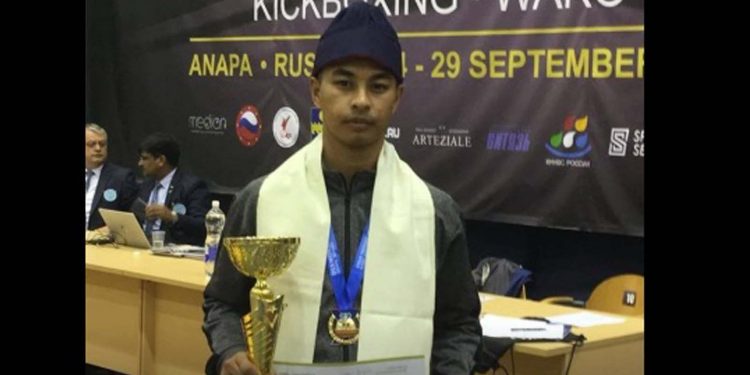 International kickboxer Hameshaniah Suiam from Meghalaya has brought laurels to his state and the country by winning gold at the 10th Diamond Kickboxing World Cup in Russia on Sunday.

Hameshaniah Suiam, who represented the India team, defeated his opponent from Iran for the top spot with a score of 21-12 in the 57 kg category.

The event, which was kick-started on September 29, concluded on Sunday at Anapa in Russia.

The event was organized by the World Association of Kickboxing Organiations (WAKO).

“Congratulations to Hameshaniah Suiam of #Meghalaya for winning gold at the ’10th Diamond #KickboxingWorldCup’ in #Russia, overcoming a fighter from Iran for the top spot with a score of 21-12 in the 57 kg category,” tweeted Conrad Sangma.

Suiam, who studied in St. Edmund’s College at Shillong, hails from Shangpung in West Jaintia Hills of Meghalaya.

He is a four times national gold medalist, according to reports.

The Meghalaya kickboxer also represented India in the fourth International Turkish Open Kickboxing Tournament held from April 4 to April 7 at Antalya, a city in Turkey.

He had also obtained a diploma certificate as international referee/ judge at the WAKO International Kickboxing Referee Seminar at Lonavala in Maharashtra.

Suiam learned kickboxing from a very young age and received first-degree black belt in the sport in 2013.