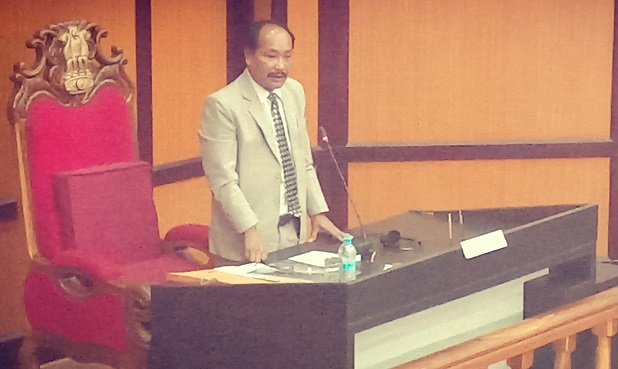 Veteran member of the Khasi Hills Autonomous District Council (KHADC) from Shella constituency, Teiñwell Dkhar was elected as the new chairman of the Council on Tuesday.

While People’s Democratic Front leader, and former chief executive member of the Council, P N Syiem did not come to the Council for the election, another member from the same party, Grace Mary Kharpuri did not cast her vote and walked out of the House in protest against the pro-tem chairperson, Teilinia S Thangkhiew, for conducting the election.

Kharpuri demanded that the proceedings of the House during the election to the chairman post should not be presided over by Thangkhiew, who has been made a party to the petition filed in the Meghalaya High Court.

People’s Democratic Front leader, James Ban Basaiawmoit had filed the petition against the Meghalaya government, KHADC and Thangkhiew, challenging the validity of conducting the election to the post of chief executive member on July 13, in which senior member, H S Shylla was elected amid abstention by opposition members.

Kharpuri said Thangkhiew has already submitted an affidavit to the court in connection with the petition, and matter is sub-judice for her (Thangkhiew) to preside over the proceedings as she has lost the moral authority to do so.

However Thangkhiew clarified that she was only following the notification issued by the governor, Ganga Prasad who authorized her as protem chairperson to preside over the proceedings of the House.

As Thangkhiew directed the secretary (legislative) to call one member after another to cast their vote to elect the new Chairman of the Council, Kharpuri said that it was better for her to refrain from voting, after which she walked out of the House alone, while other opposition members took part in the election.

Later Thangkhiew announced the election of Dkhar to the high post and immediately vacated the seat for him.

Dkhar is the fourth chairman of the present term of the Council in four years since 2014. Dkhar, was first elected in 2004 on United Democratic Party ticket from Shella constituency and he is one of the members who did not change the political party and continued to win in 2009 and 2014 district council elections from the same party.

Thus, Shella constituency produced two representatives who both occupied high post as Chairman of the KHADC and as Speaker of the Meghalaya Assembly.