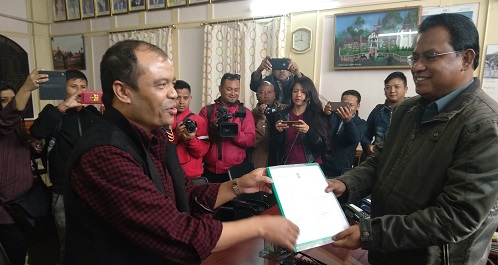 Suspended Congress MLA from Mawsynram constituency in Meghalaya, PN Syiem has tendered his resignation as member of the ninth Meghalaya Assembly.

Syiem submitted his resignation letter to Assembly Speaker, Abu Taher Mondal at his chamber in old Assembly at Khyndai Lad here on Friday.

Syiem told reporters that he has decided to resign voluntarily as member of the Assembly and will join the newly floated People’s Democratic Front on December 19.

Syiem is likely to lead the PDF which now has only an acting president.

Syiem was the only MLA who is also the member of the Khasi Hills Autonomous District Council and holds the post of chief executive member.

The executive committee is being led by People’s Democratic Forum under the leadership of Syiem.

The PDF was launched recently with the aim of developing the state and translating the aspirations of the people into reality. The PDF is the fifth regional party of the state after the United Democratic Party, the Hills State People Democratic Party, the Khun Hynniewtrep National Awakening Movement and the Garo National Council.The People’s Democratic Front (PDF), a regional political party in Meghalaya, aiming at developing the state and translating aspirations of the people into reality was on Friday formally launched.